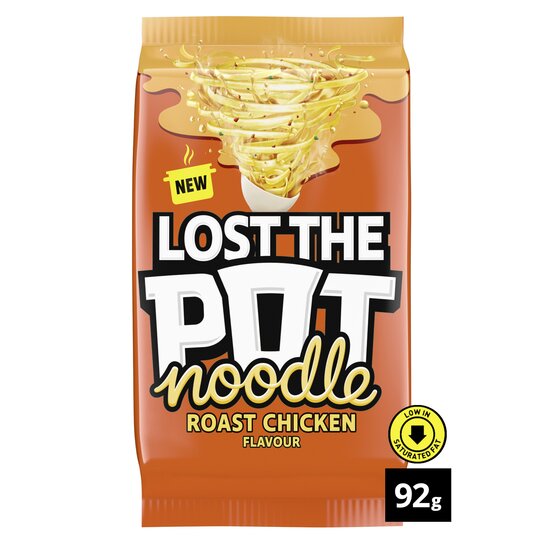 Would not buy again even if I had liked it as none of the packaging can be Re-Cycled. I also found them quite stodgy with little flavour

Lost the plot with this super noodle copy

Taste like thicker super noodles and you have to add flavour powder, then cook them on stove or in microwave. Think they lost the plot with this one as they could have just done there normal pot noodle idea (just add water) that would have been far nicer.

So happy with these noodles I wasn’t even a fan of any noodles till I received these they taste so nice,, my kids tasted them with me and now they want them so I will be buying these with my shopping, [This review was collected as part of a promotion.]

Better than in the pot

These went down a treat in our house, so my ASD daughter has an obsession with pot noodles and we find it hard to get her to try anything else but after a bit of bribing we got her to try these and they were a massive hit, the only reason they haven’t got 5 stars is I thing they could change the plastic packaging to be more eco friendly [This review was collected as part of a promotion.]

These really taste great!! But I find they do taste different to the pot noodle you can get in the same flavour. So easy to make. You can either do on the hob in a pan or you can use the microwave. Saving on plastic pot is a bonus! [This review was collected as part of a promotion.]

The noodles have a nice al dente texture and flavor unlike the limp soggy ones. The noodles are also cut short so they are much easier to eat than the long mushy noodles. But the best part of these is the taste, a nice Chicken and herb flavor. I also noticed that the liquid actually thickens up a bit like real soup unlike the mushy noodles in chicken flavored water Americans are used to. With winter coming on and working in a cold factory I'm really looking forward to a 3AM pot noodle warm up. [This review was collected as part of a promotion.]

Not as good as normal pot noodle

I tried this as there was no normal pot noodles available I can’t say it tastes anything like the normal pot noodle. It’s easy to cook and doesn’t take long however you need more to wash up than a pot. I don’t think I will get this again [This review was collected as part of a promotion.]

I tried these noodles as I wanted a quick dinner. I was overly impressed and they did rare a bit bland. I gave a 3 star as it did fill a hole when I was on the go so quick and easy. They might taste different for someone else though that is why I would recommend them to others. [This review was collected as part of a promotion.]

Prefer in the pot

while consistency was the same the taste wasn't i am really impressed at the effort to use less plastic especially hard plastics but I do prefer it in the pot no washing up its quick handy and on the go snack without the pot its a limited to a kitchen snack [This review was collected as part of a promotion.]

Nice flavour, good concept but I like the pot

Loved the idea of this as love a pot noodle and the idea of the name is great and really matched the product, the noodles were nice, the flavour was nice and a great portion, nice for a snack or lunch in work. But in my opinion it’s nothing new there are hundreds of packets of noodle brands out there, I like the pot noodles in the pot, they are handy and recyclable, not pots, no mess and easy for camping trips etc as you have everything in the pot. Would love this flavour in a pot noodle. I just prefer them in the pot but as I said the flavour was really nice and they are still the same noodle, I just feel the texture Of them aren’t the same. I would recommend as others may like I just prefer the pot [This review was collected as part of a promotion.]