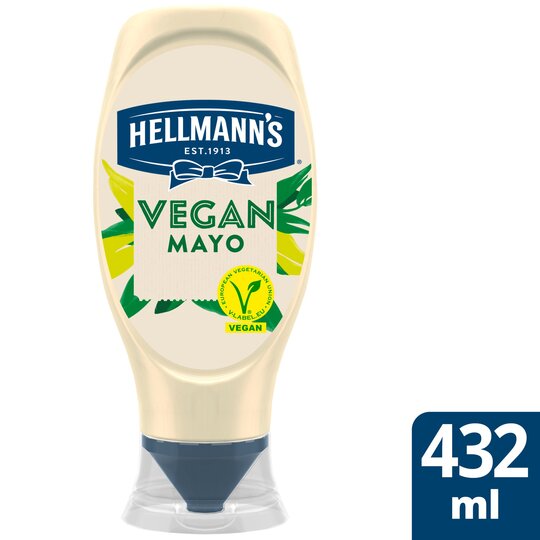 Nice mayo, shame about the bottle.

I love this mayo! The reason I give only 2 stars is the packaging. Nice idea that just does not work, because the mayo sticks to the side of the bottle and won't budge. You can't get a spoon into the top to get it out either so you end up throwing a good amount of it away. I will stick to the one in the glass jar. Great mayo though.

Really impressed with the flavour and consistency. At last I don't feel I'm missing out. I'm newly transforming from veggie to vegan and was concerned about my lack of choice but I have found Tescos by far has more of what I hoped to find and its not expensive.

Yes does state mustard but this is very strong

Great, but wasteful The squeeze packaging leaves so much of the mayo and you can’t get it out because the hole is so narrow. Going to stick with the jar,

Great product hard to get out of squeezy bottle!

I find no difference to this and the normal mayo - excellent product. However for the first time in my previous shop I bought the larger in the squeezy container - extremely difficult after the first use to get it out. Ended up cutting the container in half and spooning into a jar! Id rather it be thicker than runny and horrible, will still buy it as it is a fabulous product but in the Jar not the squeezy bottle!

Great mayo, but much too thick for squeezy bottle

The mayo is great but the container is terrible. The vegan version is thicker and more viscous than the normal Hellmann's mayo, which makes it really hard to squeeze out of this type of container. It only dispenses a tiny amount at a time compared to the normal kind, especially when there isn't much left in the container. Shame that a jar with half as much mayo in it costs almost the same, but at least with a jar I can spoon it out, rather than doing the shaking/farting dance with this squeezy container every time I want some mayo.

Nice taste once it's out of the bottle !

The taste was very good once I managed to get some out of the container. It is certainly not a squeezy bottle ! ! Had to remove stopper every time! Too much like hard work !

Mayonnaise was excellent but squeezy bottle was useless. Flow was hopeless. Had to cut bottle open to get the mayonnaise out.

Lovely mayo if you could get it out of the bottle

I love this mayo when it is sold in the glass jar - it has a lovely flavour. But I decided to try the squeezy bottle version for the extra convenience. Big mistake. The mayo totally stopped coming out of the bottle when it was still half full. Even after a week upside down in the fridge, nothing would come out. Eventually I cut the bottle in half and scooped the mayo out with a spoon and put it in a jar. Not exactly "convenient". It must be something about the recipe of the vegan version, but it just is not compatible with the idea of a squeezy bottle. Don't the manufacturers test this type of thing before they launch a new product??