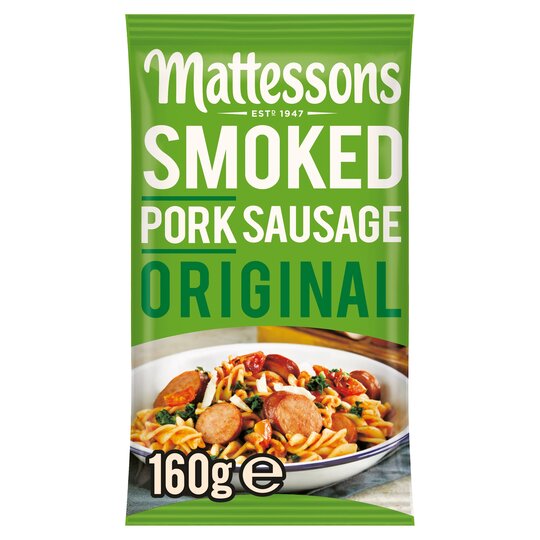 20%of the reference intake
Saturates
5.9g

17%of the reference intake

Mattessons Smoked Pork Sausage can be stored in the fridge or in the cupboard. Once opened keep refrigerated below 5°C and eat within 3 days and no later than the Best Before date. To freeze, do so on the day of purchase and use according to manufacturer's frozen storage instructions and before Best Before date.Defrost thoroughly before eating. Keep any leftovers chilled and eat within 2 days. The air holes in the foil bag do not affect the quality of the sausage. For Best Before See Back of Pack

Stir Fry
Instructions: Alternatively, slice or chop sausage and fry or stir into other ingredients.

Used to be a favourite occasional indulgence - not now. One bite and binned it. It's probably telling that both dogs refused it!

Ugh! What have you done to it?

This used to be an occasional guilty treat, normally mixed into macaroni cheese. It's now horrid. As others have mentioned, it's also shrunk considerably, but perhaps thats a good thing.

I used to use this a lot, in different recipes, or

I used to use this a lot, in different recipes, or in a simple stir fry. I’d say this is now a totally different recipe! (Cheaper ingredients too I’d bet)! Did Mattessons really think we wouldn’t notice? Did your product buyers? I think Tesco needs a good shake up and to think about putting it’s customers first…instead of profit!! 😡

We understand the cold is a problem for many sausage products, but if this keeps getting smaller it'll be a chipolata. And selling it for the same price as before is insulting. On top of that, It's full of gristle and tastes different now.

More expensive and a reduced quality.

used to like this diced through a home made macaroni cheese but it's very different now in looks ,taste and value .The german chain of stores /supermarkets in most of our towns and High Streets do much nicer alternatives and cheaper too.

Disappointing I’ve always got a packet of this in the fridge as a quick midweek meal, but the recipes been changed it tastes more processed and pale in colour, they even shrink the size. Just not the same taste as before.

Guuted they have changed the recipe, it tastes awful and very processed now. Also size reduction is ridiculous. Giving up on buying what was a favourite.

Good value at a discount

like it at a discount price :-) or it'd be too expensive.

They appear to have changed their recipe, I will never buy again, its horrid !

This is much smaller than it used to be and totally lacks flavour. It was smokey, and juicey. Now dry and bland. What gives? Not buying again.