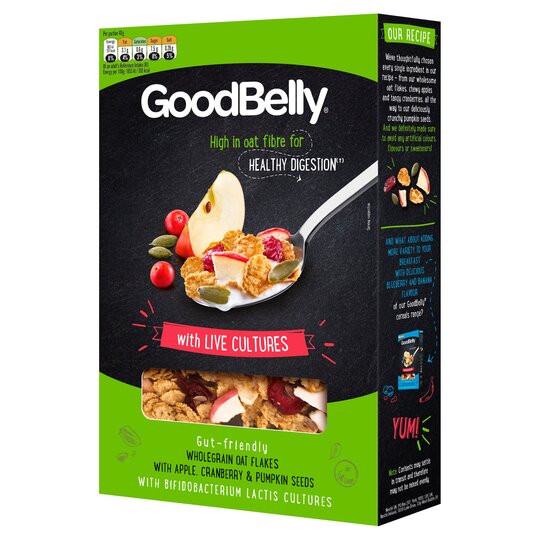 of the reference intake*
Typical values per 100g: Energy 1653kJ

Store in a cool dry place, roll down the bag and close carton after use.

8 servings in this pack

Pleasantly surprised by this cereal, although it is very sweet there is a nice flavour of apples running through it and the cereal itself remains nice and crunchy in milk. Enjoyed it as a change from normal cereal and a bit more interesting that other flaked brands. [This review was collected as part of a promotion.]

it has helped me with flatulence and indigestion . l have it for evening meal as well as breakfast ,some days .lt's not cheap but tasty and effective .

This cereal is so tasty! The added bit if fruit in the cereal gives it extra flavour and makes the cereal! And the best thing of all is that its good for you! The only one thing I would say is the box is quite small so I got through the box in just over a week. [This review was collected as part of a promotion.]

This tastes good and appears healthy however I don't understand how this can be coated in good bacteria that are going to be of any benefit, not sure how you can have live bacteria in an unrefrigerated item. [This review was collected as part of a promotion.]

Thoroughly enjoyed every bite of this cereal. So the deal is, each oat grain flake is coated in a live culture that's focused on looking after your gut, hence the name. These flakes stay crunchy throughout and did not have a "yoghurty" taste to them I was expecting. Loads of huge cranberries with a nice balanced sweetness, apple pieces and crunchy and delicious sunflower seeds, see the photo. You get a seriously varied and thoroughly enjoyable bowl of cereal which you know your gut will approve of as much as you do. [This review was collected as part of a promotion.]

I'm not a cereal person normally and I try my best to avoid the unhealthy high in sugar cereals that have saturated the breakfast market but I have to say that I have taken a liking to this particular cereal. I have heard of the benefits of acidopholus and other probiotics but I think you'll have to eat this for a while, maybe 2-3 months to see a noticeable difference to your Gut health. It's tasty and doesn't need refrigeration like yoghurt or some tablets so if you want something that will be good for your stomach than this would be a convenient choice. I'd be interested to try the other flavours to see if they will be as nice as the Apple & Cranberry. [This review was collected as part of a promotion.]

Really tasty granola and the fruity bits in it were very nice too! I'm not too sure if the bio cultures did anything, as I've only had the one box so far and I don't know if the amount you'd have in each bowl is enough to actively do anything, but it all helps I suppose! [This review was collected as part of a promotion.]

Tasty cereal but nothing special

This cereal was nice and tasty, however it wasn't anything special over other products on the market. In terms of the digestion benefits, I imagine you would have to eat over a period of time to recognise the benefits? [This review was collected as part of a promotion.]

Firstly I would be lying if I told you this cereal doesn’t taste great, because actually it is really good. The fruit isn’t too sweet, the flakes are just right giving a great texture. It’s just a massive shame that there are TWO forms of added sugar in this cereal when there really doesn’t have to be. Apple is a natural sweetener and unfortunately it is just another cereal trying to look healthy that isn’t. I won’t be purchasing again regardless of the nice taste. Remember, cakes taste good but too many and they’re considered unhealthy - cereal is no different! [This review was collected as part of a promotion.]