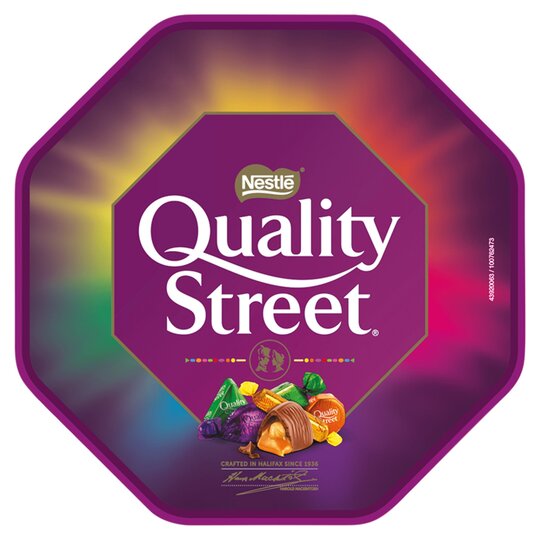 For best before end see rim of baseStore cool and dry For Quality Street® at its best store in a cool, dry place.

Important: Young children (less than 4 years) have limited chewing ability and could choke on small sweets.

Where is my chocs

Ok but I am sure there is less chocolates in the tub than last year when I opened it!

Why does only Quality Street chocolate go white?

There's an explanation on the tub that the chocolate goes white because of variations in temperature but no explanation as to why this only happens with Quality Street. I think the answer is they use cheaper ingredients than they used to. Have bought them for over 50 years but never again, a poor selection that now tastes cheap and sickly.

Tasteless, white and nothing quality about them

I purchased a tub of this when it was first offered as it was £3.50 then. There were very few of the more popular ones like the purple one, I had just 2 in the tub. However there were 6 each of the toffee penny and toffee log, the cheep ones that always get left. The chocolate was also going white on most of the rest, it's the last time I will buy Quality Street.

Great :) But bring back Nut Cracknel!

Great value when on offer. Prefer Quality St tubs since Cdbrys got spoilt by US Mondalez who cheapened the recipe to taste more like candle fat -[& sacked UK workers to produce abroad]- Nestle tastes better. Don't fret about whitening; doesn't affect anything at all! Just a temperature quirk. Wish they'd bring back the nut cracknel, & have a proper 'menu' instead of 'the purple 1' or 'the green 1'; as if we're meant to know what that means..

Poor quality, The chocolates were covered with white marks, which apparently appear when fat particles in the chocolate separate due to cold or hot temperatures. The fat rises to the surface of the chocolate through small cracks. If you store chocolate in a place that is too cold or too warm, the so-called 'fat bloom' will materialise. This is the second tub of Quality Street ordered in the past few weeks. Won't be ordering them again

I saw the two other reviews saying the chocolate h

I saw the two other reviews saying the chocolate had turned white, but I risked it and bought it hoping I would get a different batch. I didn't. The chocolate is white. Will contact Tesco tomorrow. Would have thought it would have been removed sale really. Disappointing.

the dark chocolate ones were turning white as were

the dark chocolate ones were turning white as were some of the milk chocolate verity , I was so disappointed, I withdrew the from my order this week

If buying for Christmas gifts be careful, some of

If buying for Christmas gifts be careful, some of the chocolates in my box (dated March 2022) were turning white I know they are still safe to eat, they just don't look very appealing especially to have passed on for gifts.