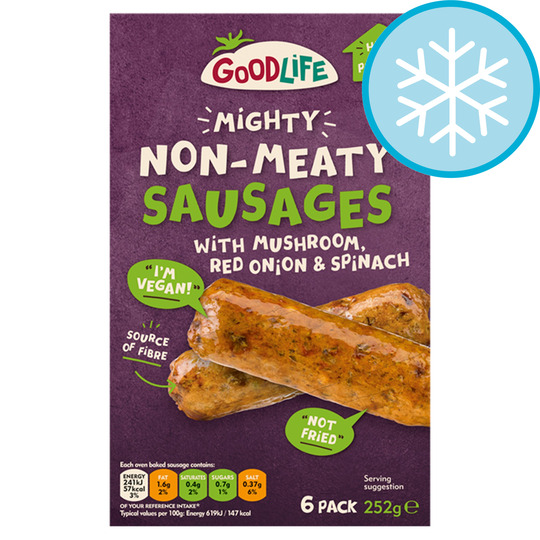 of the reference intake*
Typical values per 100g: Energy 147kcal

Keep frozen at -18°CIf food is thawed do not refreeze.

Barbecue
Instructions: Cook as per instructions above and finish cooking on the BBQ.

Cooking Instructions
Instructions: Remove from packaging. Always cook from frozen.
All appliances vary. These are guidelines only. Once cooked, check food is piping hot before serving.

Oven cook
Instructions: Pre heat oven to 200°C/Fan 180°C/Gas 6. Place sausages onto a lightly oiled baking tray in the centre of the oven for 17-20 minutes. Turn halfway through cooking.

Great sausages! much better than expected

Nice, not dry or dusty

Those are the first meatless sausages that are nice. They aren't dry / dusty. They taste lovely, but I would recommended pairing them with an item which has a strong taste, as they are mild in comparison to a meat sausage.

Absolutely awful , they seem to be wrapped in non-cut plastic.

Unfortunately they were extremely tasteless and a

Unfortunately they were extremely tasteless and a soggy texture.

I've eaten a wide variety of veggie 'sausages', but these were only fit for the bin. The texture is pulpy, they are over-processed and the taste is very strong - bitter and sour at the same time. I applaud the company's creative attempts but I'll not buy this again.

Absolutey dire sausage substitute. The casings were rather hard and chewy, and the inside very soft, with the taste and texture of mushy stuffing. Tiny little green specs were the spinach, I imagine, but you could not taste any of the listed ingredients. The flavour was vaguely herby and the texture very bready. If you bought yourself a pack of savers stuffing and made it up into finger shapes you would get as good a result for about one tenth of the cost. Avoid.

Yes, they're vegan and low fat and low salt - but this results in a total lack of flavour. If you do get them, at least fry them in some oil and get some sauces out. Won't be buying again unless they change the recipe.

These are a horrible texture; just sludge inside, even if I cook for longer than recommended. I won't get these again.