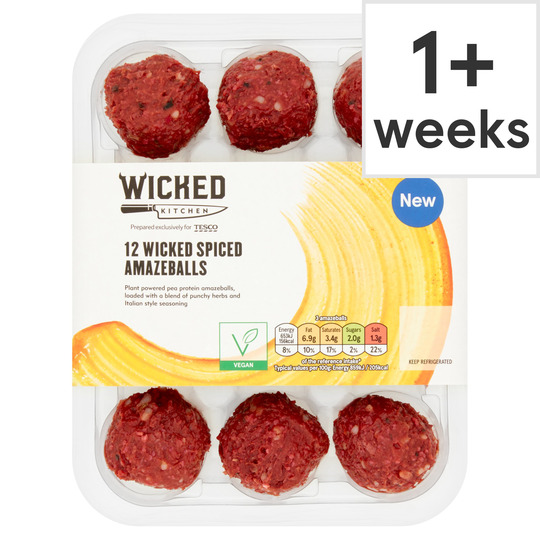 Cooking Instructions
Instructions: Remove all packaging. Gently push up each cavity in tray to remove balls. For best results pan fry.
Important
Check food is piping hot throughout before serving. All appliances vary, these are guidelines only.

Oven cook
Instructions: 200°C/Fan 180°C/Gas 6 12 mins.
Pan fry on a medium heat in a little oil for 2 minutes to caramelise. Transfer balls onto a non-stick baking tray and place in the centre of a pre-heated oven for 10 minutes.

Shallow Fry
Instructions: 14 mins. Heat a little oil in a frying pan until hot. Cook the balls on a medium heat for 14 minutes, turning frequently.

Fried these off for the specified time so they were nicely browned all over then covered with pasta sauce. The taste isn't bad to be honest - but the texture is awful - nothing meaty about it at all, very squashy, best way to describe it would be eating plasticine. I was wary about the texture when taking them out of the packet as they were so squashy so tried to make sure they got well browned all round to give a bit of texture but this didn't help at all. Family of 4 tried them and no one liked them - all went in the bin. There was also a large stack of them sitting in the discount section with yellow labels on the them - that should have warned me! If they can improve the texture I might give them another go but these were basically inedible...

I don’t usually leave reviews but I had the need to share with others that these amazeballs are not amazing at all. Firstly, the balls are so awkward to cook, so had to squash them like tiny burgers for them to cook properly. Secondly, the taste was not what I was expecting given the price tag it carries. It tasted like a very cheap and badly made fake “meat burger”. Lastly, after the pan I fried them in went cold, you could see all the amount of fat that came out of it !! Not happened to me before with any fake meat products. It reminded me of the time when I used to eat bacon or pork with all that grease and fat. Honestly, there are better products out there that are cheaper and taste amazing. Don’t buy these ! Stick to Quorn, Linda Mc, tofu, CAULDRON ( the best), beyond meat etc

I created a Tesco account just to give these a bad review. For someone who is trying to become more vegan I can safely say that these meatballs have put me off products like this and are not helping the cause. They had funny smell, I can’t quite describe it and taste was horrible, even when I was cooking them, the smelled so unpalatable. They also left a fine sandy residue in my mouth. Tesco if you care about the planet, discontinue this product and do not put others off trying to become vegan. FYI I had Tesco’s vegan plant burger there other day and I enjoyed it, but I’m not sure I would go back to it because the texture of these remind me of it. These need to go.

These were absolutely delicious. I’ve always been vegetarian but I’m finally starting to try and have a more plant based diet. In the last few months supermarkets have been providing much better vegan choices. I cooked them in a tomato sauce and everything was perfect.

These are amazing. Yes as other people have mentioned they’re a bit tricky to get out of the pack as they’re sticky when uncooked. However I just used a metal spoon and it was no trouble. I fried them in some olive oil on a low heat for 8 mins which nicely browned them. Then I added a gorgeous tomato based sauce and left them to simmer for around 6 mins. The spices tasted subtle and the texture was perfect. My husband loved the meal

I rather liked these. I used to make my own meatballs so I did the same spicy tomato and basil sauce I always served; I cooked them as stated on the packet and popped them in a warm oven while the tomato sauce finished thickening. We had them with pasta. I'm veggie but husband not; we both enjoyed these and I'd buy them again.

Tried these as our local Tesco have not had Quorn Swedish style meatballs for months. Served with a roasted peppers and tomato sauce, which is how I serve meat meatballs and the Quorn ones - so a good way to compare. They were disgusting. Texture and flavour of Playdough. My wife ate half of one then picked them out and just ate the sauce and rice. I smothered mine in chipotle sauce and that masked their artificial flavour enough to mean I could eat them, but I regretted it for the rest of the evening. Threw the leftovers away, which we NEVER do as they always go in the freezer as an easy meal another time. I honestly can't understand how the team making these tasted them and said "Yep, claggy Playdough texture and taste - that's what we were going for!" and decided to market them. Never again, and I have been put off trying anything else from this brand.

I cooked these in a tomato sauce and served with spaghetti. Out of six of us only one liked them. I felt they were too dense and sponge like. Everyone said too much fennel. Unfortunately most were not eaten. Would not recommend.

Lovely meatballs. Served them with pasta and a tom

Lovely meatballs. Served them with pasta and a tomato and basil sauce. Delicious!

They might start out as balls but they stick to th

They might start out as balls but they stick to the plastic packaging so by the time you've hacked them out they're just misshapen bits with a lot of the product left stuck to the plastic. And tastewise not as good as quorn's swedish meatballs.