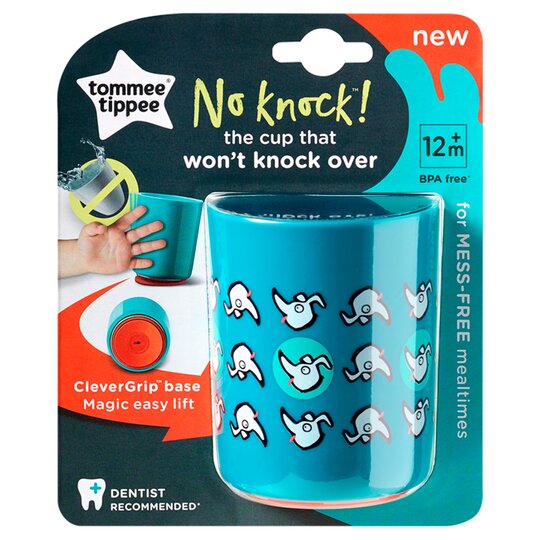 We have been using this cup for a couple of weeks now and it definitely does what it promises. It easily stands up to my little one's excited bashing, however, she can struggle to pick it up sometimes. You do seem to need to try and pick it up it up in the right way otherwise it will continue to stick which can be quite a challenge for little hands! Overall, great product and will happily continue to use. [This review was collected as part of a promotion.]

This is great! I had a play before giving it to my 3 year old, and I couldn’t knock it over. My son has used it for a few days now and really likes it. I especially love that it works on any surface, including his placemat. A brilliant product with some great designs [This review was collected as part of a promotion.]

I haven’t been able to try this cup out with my youngest yet as he’s only 4 months old, but my 4 year old however absolutely loves it. He is always spilling drinks at the table and since using the cup there has been no spills. We have a bright neon yellow/green one with fox heads on it. It sticks well on the surfaces we tried (kitchen bunker, wooden table, shelving unit) we haven’t been able to knock the cup over and it doesn’t stick when you pick the cup up. I tried it on my wooden window ledge however and it won’t stick to that. Not an issue though as we don’t normally put drinks onto the window ledge. [This review was collected as part of a promotion.]

I'm amazed with my purchase of the tommee tippee no knock cup. It does exactly as it says in the name, the suction cup on the base sticks it to hard surfaces like a high chair tray or table and if hit from the side it wont knock over. If your child wants to drink then they simply lift the cup straight up. Unfortunately it doesn't have a lid, there for if your child was to drop the cup it isn't quite mess proof, however it is an excellent way to transition from a sippy cup to a normal cup and will definitely save some of the spills and mess. [This review was collected as part of a promotion.]

It has like a suction cup on the bottom of it so its fine that it wont get knocked over but trying to pick it up again its difficult to get off the surface once stuck so you still manage to spill the liquid [This review was collected as part of a promotion.]

Still think it needs a lid, she managed to get it off & spill the contents everywhere, would recommend for an older child though . [This review was collected as part of a promotion.]

Magical, but for older kids

We have tried and tried, but unfortunately this product didn't work for us. The look is brilliant and the cup looks and feels of good quality. The "no knock" feature is magical. However, this is where my 11 month old had some issues. Cup doesn't lift up if you're taking it at an angle, it needs to be straight up. So she just gets super frustrated with it and attempts to rip it with force again and again until it comes off and then it just flies across the room, water all over. We will definitely keep it for when she's a bit older and try again. [This review was collected as part of a promotion.]

I’ve been wanting to get my hands on one of these cups for a while. It sticks well to any surface and my little boy can’t knock it over, he’s 9 months now so I’m trying to get him used to a cup with no lid or handles. It has a lovely bright design and gets a thumbs up from me [This review was collected as part of a promotion.]

This cup is amazing for all ages. To be fair my 1 year old and 6 year old both had a go and both loved it. I would definitely recommend it to friends and family. [This review was collected as part of a promotion.]

My son is really fussy with cups and I've been trying to encourage him to use an open cup for a long time and have been faced with him point blank refusing. He loved the pattern on the cup and instantly asked me to put some water in it. He was keen to try drinking from it and loved trying to knock it over to no avail. The idea behind this cup is brilliant in a house with two small children there are often spills from open cups and I'm forever moping them up. I'm sure this cup will help to avoid accidental spillages and give my oldest more confidence to drink from an open cup without knocking it over. It doesn't avoid all spills though as my youngest 10 months was able to lift the cup and tip it out. Ideal for slightly older children prone to knocking cups over but still needs to be out of reach of littler ones [This review was collected as part of a promotion.]