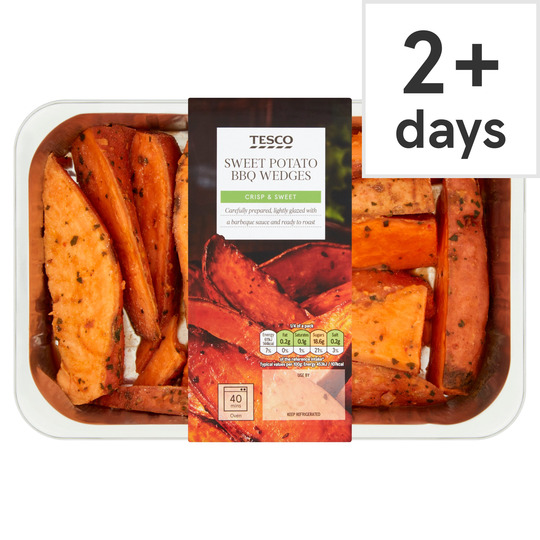 Not suitable for home freezingKeep refrigerated.

Instructions: Remove all packaging and transfer the sweet potatoes onto a pre-heated baking tray. Place in the centre of a pre-heated oven for 40 minutes. Alternatively, remove sleeve and film. Place the tray in the centre of a pre-heated oven and cook for 45-55 minutes. Turn the potatoes once during cooking. For a great BBQ finish, remove the sweet potato wedges from the oven 10 minutes before the end of cooking and place wedges directly onto the BBQ grill. Cook for 5-10 minutes or until coloured, watch carefully. 200⁰C/Fan 180⁰C/Gas 6 40 mins

not good quality badly prepared and hard when roas

not good quality badly prepared and hard when roasted or boiled

Didn't cook through when I followed the guidelines, then left in the oven for an extra 20 minutes and some were still raw in the middle. Couldn't taste any bbq on them, just seemed like a chunky cut sweet potato without any added flavour :/

I personally found that they were a bit bland, and took a lot longer to cook than what they said on the packet. Even though I cooked them for an hour some were still hard and they were a bit dry, after adding a little water. For the price was steep. I'll make my own next time for half the cost.

I love sweet potato and often make my own wedges. Decided these would save a bit of time but they were awful. I baked them in the oven for 50 mins and they were still brick hard. Had to throw them all out.