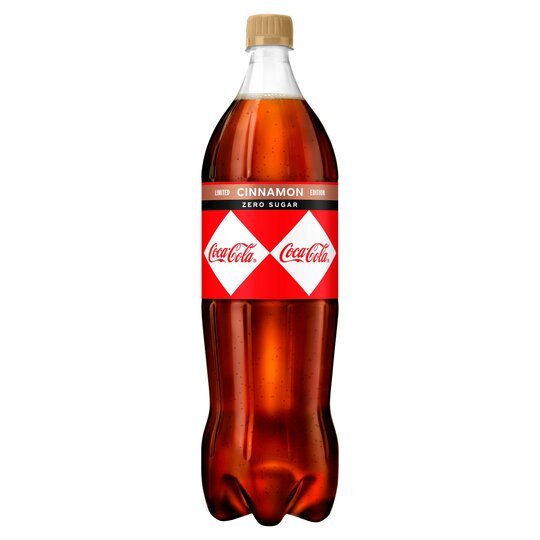 0%of the reference intake
Saturates
0g

0%of the reference intake
Sugars
0g

0%of the reference intake

of the reference intake*
Typical values per 100g: Energy 1.4kJ

Store cool and dry.Best before end: See side of cap or bottle neck for date.

Contains a Source of Phenylalanine.

Usually they get a good balance of flavour, but with this, oh dear oh dear, was awful, bit more cinnamon would have been good and some better taste testers

This is the best zero coke flavour!! It has a lovely slightly spicy kick to it, which only adds to an already quality tasting soft fizzy drink. I am so impressed with this new addition to the coke zero range. I really hope it loses it's LIMITED EDITION tag and becomes a permanently available drink.

I thought it would taste awful but when I tried it I realised it was the complete opposite. The cinnamon taste is subtle yet recognisable.

Tastes more like coke than standard coke zero does

Tastes more like coke than standard coke zero does so its a win win.

The best one yet. I love this flavour. It tastes exactly like cinnamon. Hopefully they'll be plenty left on the shelves for Christmas!

One of my favourite flavours of Coke. Not too strong on the cinnamon but just right. Buying loads more before it disappears..lol