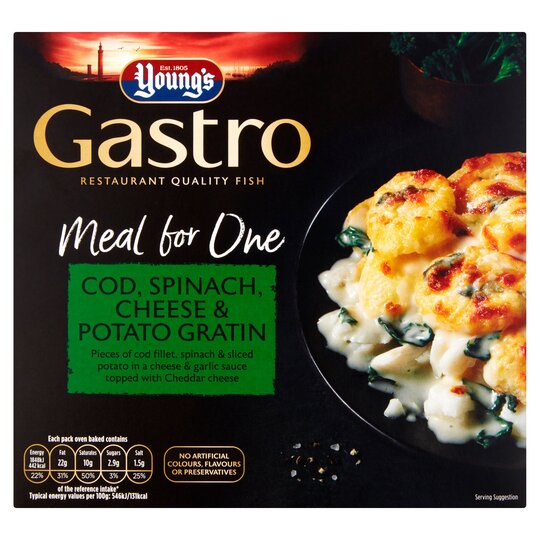 of the reference intake*
Typical values per 100g: Energy 546kJ

Cooking Instructions
Instructions: Our Cod, Spinach and Potato Gratin is best oven baked straight from your freezer. Ensure product is piping hot throughout before serving. All appliances vary, these are guidelines only.
Caution! Plate will become hot during cooking.

Love it every time, really tasty. Try leaving it t

Love it every time, really tasty. Try leaving it to cool a while, so the sauce thickens.

Loads of potato, ok for fish but the spinach was a

Loads of potato, ok for fish but the spinach was a tiny ball, less than a fork full. Very disappointing

Needs to be removed from sale!

It's immediately obvious even before eating that it's far from Gastro quality, 'Ghastly meal for one' would be a more appropriate description. The ingredients state 33% sliced potato, but looks more like 90% and cod is said to be 23%, I think however they forgot to put a decimal between those numbers. The cod is just mushy fragments (no chunks) and if you could somehow put together all the cod in this dish, you would be lucky to have enough to make half a fish finger! The meal is further let down by the consistency of the sauce which is quite watery. Not much can be said about the taste as unsurprisingly it tastes of just potato served with a runny mustard style sauce, you can barely taste the cod and no taste of cheese whatsoever. In future I will think twice about buying any of Young’s other products as after this particular meal it felt as if I’ve been mugged by them.

Just right with chips being veggie

If you like a half filled tray of sliced potato in a watery bland sauce with a scattering of minuscule pieces of cod this is for you, at this price this is a rip off, if this is a meal for one its for a very small person, 360 grams! (wish i had weighed it) Cheese on top? what cheese. An unpleasant experience save your money and your taste buds. buy something else.

this product is the best we have tasted,,,,,

this product is the best we have tasted,,,,,

I was really looking forward to this. Sadly it was one enormous disappointment. A great dry stodgy lump. I had to put some pasta-type tomato sauce over it to make it in anyway edible.

I have purchased this product a few times . The last was the first cooked in the oven rather than microwaved . So this was the first time I had removed the plastic top before cooking . Very , very little cheese . Imagine a level teaspoon of powdered cheddar sprinkled on the top . I was wondering why it wasn't at all cheesy and now I know . Not much fish either . Mostly potato with a little spinach . Not buying again .

Great product, where has it gone, please bring it

Great product, where has it gone, please bring it back.

In theory this is one of my favourite meals. In practice it consists mostly of just tasteless potatoes with microscopic amounts of the other ingredients. Tried it twice, because first time I thought nobody's combination could be that unlucky twice. A real disappointment and very bad value for money Maybe someone can create the REAL deal with a FAIR proportion of ALL ingredients and some flavour? If it looked and tasted the way its picture promises, I'd buy it every week and even gladly pay more!!!

Regular Price £1.75, Clubcard Price £1.40. Offer valid for delivery/collection until 26/01. The discount won’t show in the guide price but don't worry, it will be taken off and show on your final delivery note.

Regular Price £1.75, Clubcard Price £1.40. Offer valid for delivery/collection until 26/01. The discount won’t show in the guide price but don't worry, it will be taken off and show on your final delivery note.