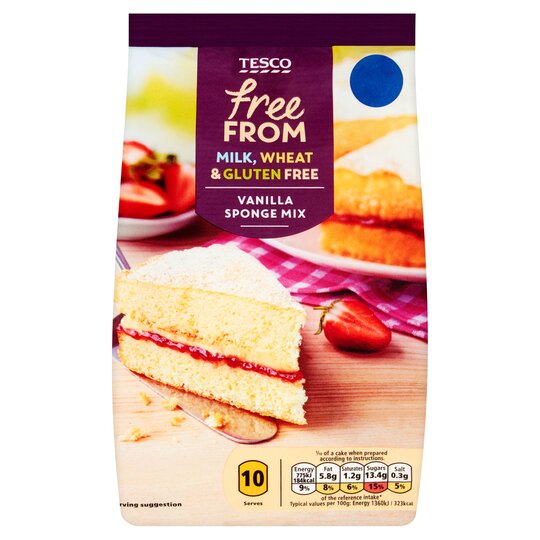 This is the first time I have tried this mix and it will be the last! Wish I'd read the other reviews before buying. Very dense, dry texture. Not very nice to eat.

This is awful. I have used this mixture for years

This is awful. I have used this mixture for years and made many cakes and muffins for my daughter. This used to be top class and I have always praised Tesco’s Free From range but I am so disappointed in this. It is dense, tastes powdery and just doesn’t rise. I will not be using again.

Cooking as per the instructions it didn't rise and

Cooking as per the instructions it didn't rise and looked like a giant omelette, it was inedible. So tried again and went back to a previous recipe (another brand) using vegetable oil instead of marge (and one extra egg) and it worked perfectly.

Not a sponge cake.

I followed the instructions carefully but my 'cake' looked more like a pancake, very thin and certainly not light and spongy like the picture. A waste of money and a disappointment for my husband who is on a special diet.

I added butter instead of oil

I used to buy this when it was the old recipe but I don’t like the new version because you have to add oil. However because of the recent shortage of all GF flour, I thought I’d try it again but this time I used 120g of butter instead of the oil. They tasted a lot better and seemed fluffier.

This recipe has changed from the previous mix! I liked the old one better. This one is quite dry and doesn't stay as fresh as the other one did. Morrison does a better mix, like your previous one Tesco! If it isn't broken, don't fix it!

The cake was horrible stodgy and dense. It didnt rise when baking although I followed instructions exactly. As a student, who bought the last available GF cake mix in shops, I made myself a disgusting 21st birthday cake which I left after 2 bites. Very disappointed.

This used to be lovely but since the new recipe change it has a gritty texture and a powdery taste. Awful.

Its ok i add cocoa to it to make chocolate version

Its ok i add cocoa to it to make chocolate version can be a bit gloppy so add some weg oil if needed. Very sweet could do with removing some of the amount of sugars.