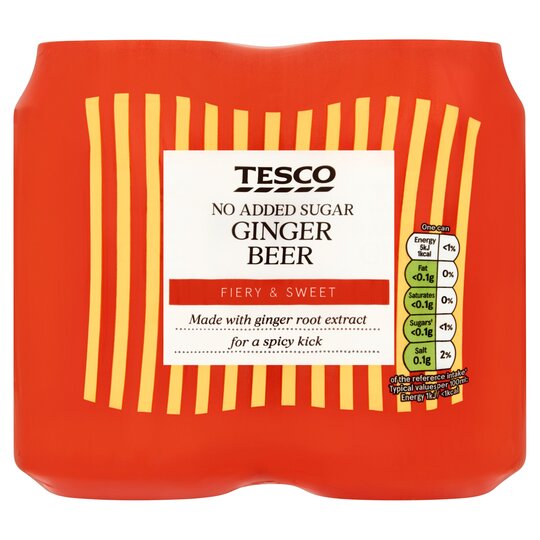 Not suitable for home freezing. Keep cool and out of sunlight.

A "very wrong" aftertaste that just isn't ginger beer. Tesco, what were you thinking? Also the taste is oddly sweet. Not right at all. The worst part is I have three cans left to dispose of. They are going in the bin.

The saccharine init is awful

The ginger flavour in it is quite good but the saccharine taste is horrible, tried it once would not buy it again.

"Fiery and sweet" it says on the front of the can but unfortunately its neither of these. Has to be weakest ginger beer that I've had and fails in comparison to the Jamica Old Style and Bundaberg you stock.

This is one of those products which claims "It is but it is not". So it is OK with taste which over powers the metallic sweetener, I would not say its "Fiery" but it does leave a small bite on the tongue. There is nothing Tesco can do about it as it is because of the sweetener added! I do not generally drink lots of this stuff but I do drink a lot of Vergils American version, although expensive it does not have Sweetener and it is lovely and the cherry flavour one is good too. I will always stick a tin of this in the fridge as most sweetener drinks are horrid to taste, I see Tesco have taken the 2 litre version off of home delivery, pity as that was unsweetened. I am very anti Sweetened drinks but it is becoming very hard to get the old stuff now.

Got a strange addiction to this - I like the flavour - is refreshing - not sickly sweet tasting like some other low sugar soft drinks Fab price also.

We love the taste of Tesco's own sugar free Ginger Beer. Problem is so do a lot of others has shelves often empty....

Was great, but now Rubbish

The original as per the above packaging was brilliant and I would definitely have given it 5 stars, BUT it has been replaced with new version with different packaging and it now tastes of nothing, I would have given it NO STARS but you can't do a review without giving it something so I've given it one. The ginger root extract is now the last ingredient listed which tells a tale of its own!! So I certainly won't be buying it again.

deeeeeelish .... almost peppery that you feel in t

deeeeeelish .... almost peppery that you feel in the back of your throat