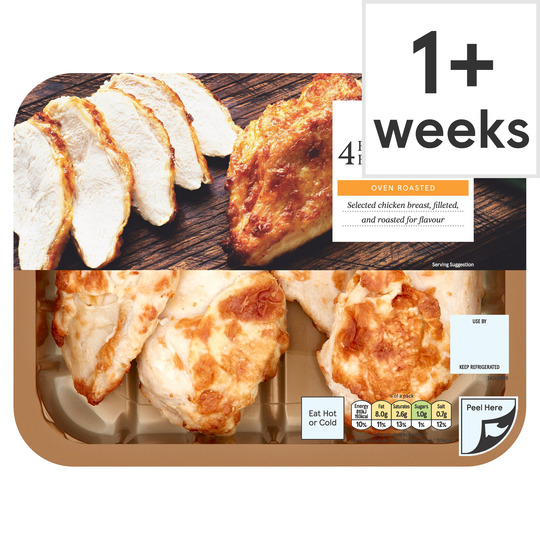 Suitable for home freezing. Ideally freeze as soon as possible after purchase but always by 'use by' date shown. Follow the preparation guidelines above. Once defrosted use on the same day and do not refreeze. Defrost thoroughly for a minimum of 12 hours in the fridge. Once opened, keep refrigerated and consume within 2 days and by ‘use by’ date shown. Keep refrigerated.

Awful. Rubbery and tasteless. What has gone wrong?

I used to buy this chicken all the time, but over recent months rather too many of the packets have contained one or two chicken breasts that have been rubbery in texture, tasteless and truly awful to eat. In fact, most of these have ended up in the bin. I don't know what has happened, but I have now stopped buying this - and it used to be a weekly staple. Please sort this out soon.

It used to be lovely chicken until they started using Thai chicken, now it’s greyish, rubbery in texture, lots of liquid comes out, inedible, had to throw it away, won’t be buying anymore unless it goes back to British chicken again.

Do not buy, these are awful

These used to be really nice and my husband and I would make a chicken salad with these on a regular basis, but recently, they have been tasteless, rubbery and very hard. Some a very dark colour, they do not taste like chicken at all. The price difference obviously reflects in the quality of this chicken, it is awful.

I have just thrown 6 of these chicken breasts in the bin. I really do not know how they passed quality control. They were covered with a layer of skin and fat so thick that when removed the size was reduced by at least a third. What was left did not look like a chicken breast - a small, square slab which proved to be so difficult to get a knife through that we reluctantly abandoned them to the bin and had cold meats instead. This was not a one-off. My sons are chicken-mad, and eat a cooked chicken breast every day. I alternate food orders with Sainsbury’s. They’ve been complaining about Tesco cooked chicken for some weeks now. Apparently the quality used to be so much better than Sainsbury’s but I’ve now been asked to buy no more. After this experience I just wish I’d listened to them before.

The quality of these just seems to be getting worse by the week! Will have to find an alternative or go elsewhere. Would definitely not recommend.

Been buying this for years recently chicken tough,

What is going on? Used to buy these on a regular a

What is going on? Used to buy these on a regular and they were tender, moist and delicious. Bought again recently and they were really tough, literally a sharp knife had trouble cutting them. Went in the bin.

This chicken is fromThailand. Support british

These used to be lovely but at some stage in the last 6 months they change (when the price dropped) and the are now nasty.

I read they come from Thailand, would dread to think of the welfare of them. For that reason alone will not touch them any more. Should be british. I got some for my dogs, they were slimy to the touch, can't say I would have wanted to eat them