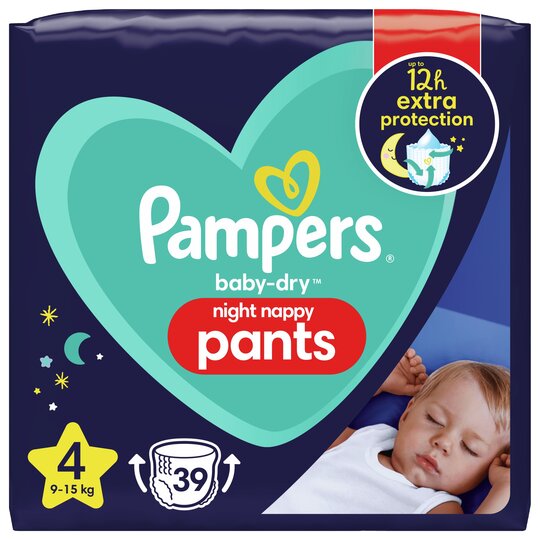 To avoid danger of suffocation and/or strangulation, keep all packaging material away from babies and children.

My 23 month old had recently started soaking through his nappy in the night, which I've heard is common at this age (bigger bladders / sleeping longer). We decided to buy these nappies which were specifically advertised as being for tonight time and would provide protection for 12 hours. Sadly, these nappies were utterly useless, we have only used one and the rest will go in the bin. They were much worse than the regular supermarket own brand nappies we'd been using. He was absolutely soaked to the point it felt cruel. I'm not sure how or why these nappies were advertised as being for nighttime dryness but they are most certainly not fit for purpose. What a waste of money, but more importantly, an awful night for my boy

My 2 year old has been wearing pampers nappy pants since she was around 5 months old and never had a problem. She has used these for a couple of nights and has developed a nappy rash and has leaked. She hasn't had a rash or needed cream or leaked in at least a year. The night pants also seem fuller than her old nappies in the morning, but she isn't sleeping or drinking any more than usual

Ok but not the miracle hoping for

I was excited to see that Pampers had made a night time nappy pant. My son is 6 months and tends to sleep on his side and his nappies often leak around his waist even though the nappy isn't particularly full. So he wore these night time nappy pants for the first time last night, unfortunately he did leak. On the plus side, the nappy was very full. The design is good in theory, the nappies are tighter around the leg and waist. Also despite a full nappy the inside did feel dry so I know he won't be woken up by the feeling of a wet nappy.