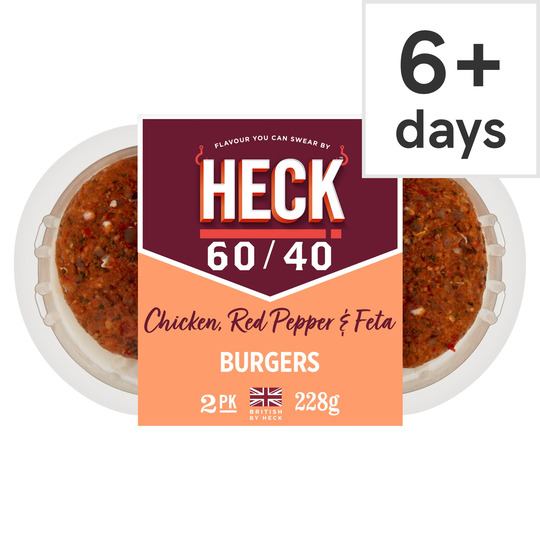 Keep refrigerated below 4°C. Suitable for home freezing. Freeze on day of purchase. Please use within one month. Defrost fully before cooking: do not refreeze once defrosted.

Cooking Instructions
Instructions: Remove all packaging before cooking.
Cooking instructions are a guide only from chilled. Ensure piping hot throughout before serving.

Shallow Fry
Instructions: For best results
Pre-heat a pan on a medium heat. Add a little oil and pan-fry for 12-14 minutes, turning occasionally.

Whilst extra care has been taken to remove bones, some may remain.

I enjoyed these, cooked them in the oven rather than fry/grill them, as I had other food in the oven at the same time. Nice and firm, I with-held one star as I think they could/should be more highly flavoured with red pepper and feta.

These taste awful. 1 bite and the rest went in the

These taste awful. 1 bite and the rest went in the bin. My daughter didn't like them either.

Bliddy horrible in both taste and texture stick to sausages

Bought these on a whim, don't think I will buy them again. The cooking was good, and the texture (eventually) held together, and the cooked product was moist, and retained good texture. However the flavour was, well, to me like salty chorizo. I honestly thought I had bought chorizo burgers, I could not taste chicken or feta. It wasn't horrid but just not the flavour I wanted.

I love everything Heck in the range. It helps with my healthy diet .

I was sent this as a substitute and wish I'd known to refuse it. As stated in another review, the texture is weird. As for the taste, whereas Heck chicken sausages taste of chicken, these burgers do not. The flavour I got was BBQ, which I dislike.

These were really tasty, they had the texture of soft feta cheese with the flavour of chicken. The chicken was really well seasoned and the red peppers gave them sweetness. I will definitely buy these again.

Really enjoyed these burgers, nice tang to them, cooked onions and topped with cheese to make them into a cheeese burgers. Texture is very much like Vegiterian / Vegan burgers. I'd buy them again :)

These were nice.. a bit spicy.. But will buy again

Really did not like this. Texture was weird. Cannot find any info on whether it is chicken or reformed chicken. It may have been the leeks which I hate. Called red pepper, feta and chicken burger but the leek content is higher than the feta (3%) couldn't taste feta at all. If I had known it had leeks I would not have bought it. I will give the other one to someone else, they may like it