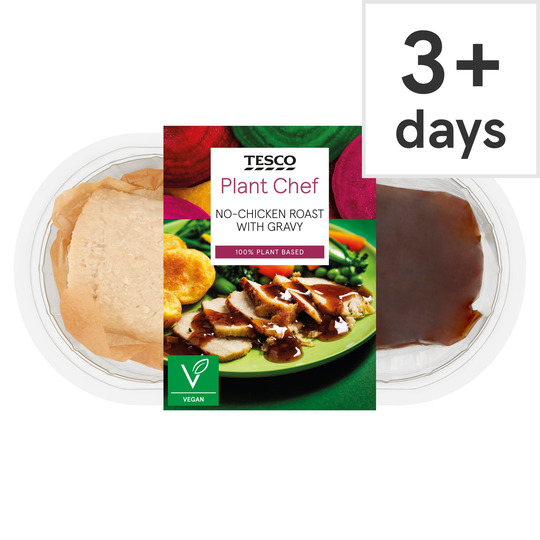 22%of the reference intake
Saturates
2.2g

11%of the reference intake
Sugars
3.6g

33%of the reference intake

Instructions: 200°C/Fan 180°C/Gas 6 25 mins Place garlic pellet and gravy to one side. Pan fry on a medium heat in a little oil for 2 minutes to caramelise. Transfer onto a non-stick baking tray and place in a pre-heated oven for 21 minutes, turning halfway during cooking. Place garlic pellet on top and cook for a further 2 minutes.

Yummy for meat eaters too

This was in the reduced items. We are not vegetarian but have not got a problem trying vegetarian food. This was nice. A nice texture, moist, full of flavour. It surprised me! We split the pack into 3 equal amounts which was plenty for us. Ten year old daughter also liked it. The gravy was lovely as well.

The texture was really bad - soft but "claggy". The taste was also very synthetic. Shame as so many vegan roasts have soy in them which I'm allergic to.

The roast was fine according to my grandson but the gravy was fairly disgusting! He said It smelt horrible (it did) and tasted horrible. He had some I made instead.

Amazing! Perfect for family roast - served 2 vegetarians. Would definitely recommend. The gravy was horrible but I would still buy again and just use my own gravy.

Very disappointing The gravy was possibly the worst food I have ever tasted and the outer skin of the rather bland roast was very tough, The garlic melt butter was bland too -it needed to be stronger to mask the horrible taste of the gravy.-90% of which was thrown away.

This cooks well and has a great taste and texture. It carves well and meat eaters like this too. It is also nice the following day in a sandwich with some cranberry sauce (If you have any left the next day) Some vegan roasts loose texture when cold but I found this one didn't

I did not like it at all .I tried and binned most of it

Tastiest vegan roast on the market

I absolutely love this roast, it’s the only veggie/vegan roast I buy after not liking others. It looks bad in the pack but as long as it’s pan sealed before cooking its fab. The texture isn’t bitty and the flavour lovely (my 6 year old non vegan also loves it) the only downside is the gravy so I tend to just leave it and make my own

This was really nice, except for the "gravy" bit, which was inedible. The meaty bit and the garlic butter were lovely; if they doubled the size of the nice bits and left out the gravy stuff I'd be very happy.

We had this for Sunday dinner. The chicken had a d

We had this for Sunday dinner. The chicken had a decent texture and an ok taste. The gravy however was gelatinous and bitter. I’m pleased Tesco is doing so much vegan stuff but someone needs to actually taste this before selling it. I wouldn’t buy this again.