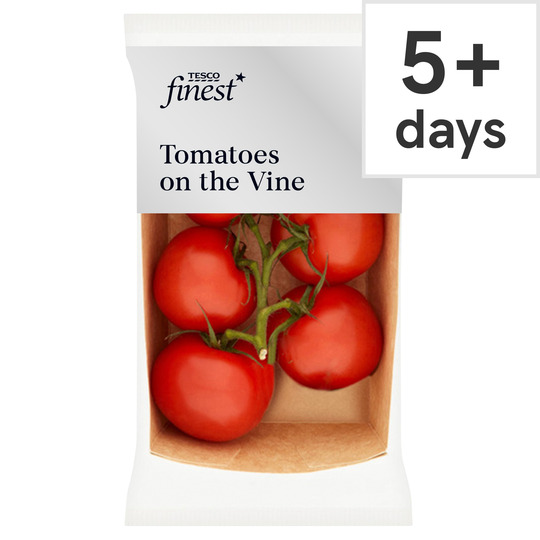 I have been buying these tomatoes for a while because of their flavour. Unfortunately over the last two weeks they have become totally watery and quite flavourless, when fried they turn into a watery mess. I shall not be buying any more of these until Tesco find a different supplier.

These tomatoes came from the Isle of Wight. Very good quality for commercially grown toms. I never buy tomatoes from Spain, they are disgusting. I go without when I can't get English grown!

I normally buy organic tomatoes from farmaround. These smelt and tasted as good as the organic ones I pay more for.

Vile--threw them in the bin... Hard, tasteless ,not ripe and shouldnt be sold as they hardly resemble what a tomato should be. Im a gardener and look forward to growing my own next year- 'Gardeners Delight'- delicious! If they were Tesco's finest then i dread to think.....

There is absolutely nothing fine about these tomatoes. Pale tasteless flesh inside. They don't ripen when left out of the fridge. Typical Dutch tasteless tomatoes. Tried them twice and both times hugely disappointed. It is Summer, Tomatoes should be big, red, juicy and flavourful. Find another supplier Tesco.

Magnificent firm juicy full of flavour, last well stored in cool open place rather than inside a full fridge. Just like the those grown when people had time to let the product mature at it’s own pace ! Well done

Purchased only as shortages of Salad Tomatoes

Purchased only as shortages of Salad Tomatoes

Horrible imports from the Netherlands

These are horrible imports from the Netherlands - clearly the Dutch are keeping the best for themselves because these are tasteless and very hard. I deliberately don't put them in the fridge because that would make them harder ! Tesco need to sell British tomatoes which imho have a flavour far far superior to most other countries - support Britain - not the Dutch !