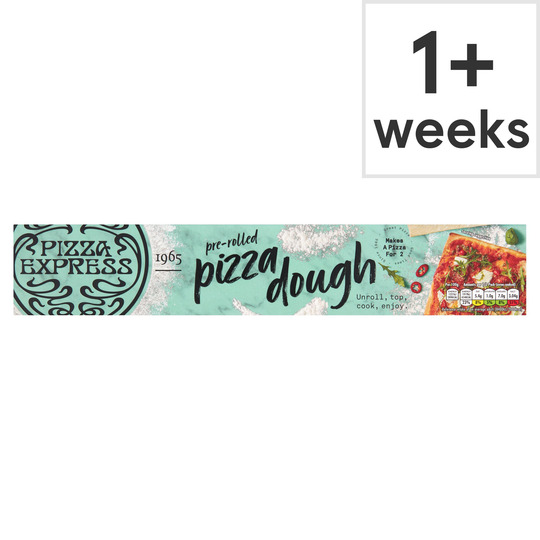 8%of the reference intake
Saturates
1.0g

5%of the reference intake
Sugars
7.0g

51%of the reference intake

of the reference intake*
Typical values per 100g: Energy 1221kJ

Keep refrigerated below 5°C, once opened use immediately.Not suitable for home freezing.

Oven cook
Instructions: Cook it the PizzaExpress Way
1. Preheat oven (200°C/Fan 180°C/Gas 6), remove pizza dough from box and clear film and use immediately.
2. Unroll the pizza dough carefully and place dough and baking paper onto a baking tray. P.S. Sometimes our dough may be speckled, this is the natural flour shining through.
3. Top your pizza and cook on the top shelf of the oven for 15-25mins. You'll know it's done when the toppings are golden brown and the base is crispy. These cooking instructions are a guide only, check product is piping hot before serving. Not suitable for microwave cooking. If there's any leftover, please don't reheat, it's nicer cold. Enjoy!

I made some pizza tonight in the air fryer with this dough, which tasted amazing. It was so good I even made some as flatbread to eat on its own. My 12-year-old daughter also loved it.

Works exceptionally well in a wood pellet pizza oven, in the rain, in the New Forest…I’ve tried pretty much every dough available and this one is in my top three. Like all dough’s, oven’s gotta be hot guys

Great pizza base, will buy again

Glad I didn’t read reviews before I bought this. This was great. Removed from fridge before use, and I removed the backing paper and placed it on non stick foil before making up the pizza’s. Heated the baking tray and placed ready to cook pizza on this. It worked a treat. Lovely cooked topping and lovely crisp base. Would certainly buy again. ( I precook my chicken, sausage and veg for pizza topping).

I don’t normally write reviews, but felt compelled to when I saw some of the others. This is a perfectly adequate pre-made processed product made for your convenience, at a cheap price. What pizza express can’t do, is account for your oven, the tray you out the dough on, what sauce and topping you use, or level of capability on the kitchen. Makes a perfectly crispy and adequate pizza. As another reviewer stated, even crispier if you part bake before topping. What it won’t be is your favourite on a romana base as of you were actually at pizza express…

Absolutely Horrid: I don't often write reviews, however, I felt compelled to warn other people about this shocking excuse for a pizza dough. It was so bad I just had to comment. What a total waste of money, and I'm being polite about it. This is the worst pizza base I've ever had the misfortune to try. I cooked it for a bit longer than it stated as 15 minutes into cooking it was still a raw sticky unleavened mess. I had every right to expect it to be a great pizza experience but it was completely ruined by this stodgy, clammy, flat disgusting excuse of a pizza base, with no attempts to rise in the oven like any other pizza dough would have done. There was also a nasty bleach smell from the base. It deserved nothing more than the bin. I'm now left wondering if it was even fit for human consumption and was it some industrial gunk of some sort that ended up in a Pizza Express box by mistake. If you have already bought this, don't use it, honestly you will be wasting more money on the topping and fuel to cook it.

The worst pizza base I've ever had!

I've never felt compelled to write an online review before but this shocking excuse for pizza dough was so bad I just had to pass comment. I couldn't bear to think of anyone else wasting their money on this dreadful product! If I said it really was that bad I'd be being polite about it. Quite simply, this is the worst pizza base I've ever had the misfortune to unwittingly insult my mouth with. My stomach is none too happy about it, either! I cooked it for a bit longer than it stated and, although my toppings were really nice, really really nice in fact, what I had every right to expect to be a great pizza experience was completely ruined by this dense, stodgy, flat, clammy, chewy, leaden embarrasment of a pizza base, so bad it simply couldn't be bothered to stir itself and make even the vaguest of attempts to rise in the oven like any other self-respecting pizza dough would have done out of basic courtesy! Having forced myself to chew and chew and chew my way through the first slice, bogged down interminably by it's clammy dense nastiness, I had no choice but to set aside my dislike of throwing food out and scraped the topping off the remaining pizza base and ate that on it's own. The topless pizza base still left was deserving of nothing other than being despatched down the toilet but, so solid was it, no way would I risk blocking up the toilet with its nastiness! I'm now left wondering if it wasn't a new Polyfilla product that somehow ended up in a Pizza Express box by mistake. I've no doubt it would do a far better job of filling a hole in a leaking dyke than any Dutch boy's finger could ever do! Believe me, folks, your stomach deserves far better than this on pizza night. Use it creatively though and it might just prove to be the perfect filler for your next bank holiday DIY project! My stomach now feels like it's lined with lead. I dread to think what I'm going to go though in the morning!

the WORST pizza base i have EVER tried, what a waste of space in the shelves, and my stomach, what waste of electricity for the oven that cooked it, energy for the guy that delivered it, dish soap for the dish that had the misfortune of holding it, and god what a waste of money when absolutely any other brand cost half of what they charge, bleah!

I think some people have incredibly unrealistic expectations of some products that leads to perfectly adequate products being messed with beyond recognition, or just simply being discontinued. It's a pre-rolled pizza dough - it's not going to sell your home for you, or raise your children for free. It's marketed as a thin crust pizza dough; it fits the description, and it cooked in around 20 minutes - if you're expecting Michelin starred food, you'll be disappointed. This is my go to product when I need a quick fix; I don't have to get the proofer and the mixer out to get delicious tasting pizza in under 30 minutes.

Our house’s favourite pizza dough, we put it in the oven for 10min @ 200, then bring it out, put on the sauce/cheese/topping, then back in for 5-10min. I like the rectangle shape as it’s fits the tray perfectly without having to roll at all.

Awful. Completely raw and flat even after 30 mins

Awful. Completely raw and flat even after 30 mins on a pizza stone. Do not buy