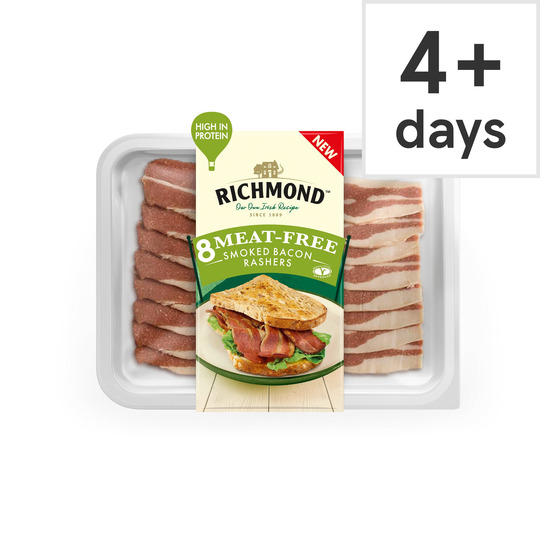 of the reference intake*
Typical values per 100g: Energy 748kJ/179kcal

Keep refrigerated below 5°C.Once opened consume within 48 hours. Suitable for freezing. For best quality, freeze on day of purchase and use within 1 month. Defrost thoroughly before use. Do not refreeze once defrosted.

Is it bacon? No. Does it taste like bacon? Not really- nothing does. Is it a nice smoky slightly meaty addition to a sandwich that crisps up beautifully in a hot frying pan? Yes. Much better than the quorn alternatives. If you're looking for a perfect bacon replica (like the richmond vegan sausages are to real sausages) you'll be disappointed, but these were extremely tasty in their own right and can be used in the same way as bacon, so I'm sold. A better texture than the thick, dry This isn't bacon brand too.

Tastes really nice, however I do feel conflicted buying into a company that treats and kills animals horribly even though i'm paying into the vegan option the money goes to the same company, guess that's the same with a lot of places though.

Brilliant taste couldn't tell the difference from the real thing

I am not sure it tastes like bacon, since I possib

I am not sure it tastes like bacon, since I possibly never ate it, but it surely tastes good and is cruelty-free.

What a pleasant surprise, l bought these with great trepidation having tried the sausages, which were vile, they tasted like chemicals yuck, but always looking for a good bacon butty substitute l was delighted with these, being a veggie for 35 years and l have tried most meat free substitutes l love these rashers, l asked my meat loving husband to taste and he was impressed, if you like smoked streaky bacon then these are for you, had them on a bread cake with tomato ketchup yummy

So disappointed. I often buy same brand vegan sausages, which are good taste-alike, but this does not replicate any bacon I have ever eaten . I really fancied a guilt free bacon buttie, but this was like smoky cardboard. Tried offering it to the cat and got a look that could kill. The whole packet went in the bin.

Smells like bacon when cooking and the part that didn't look like white fat tasted ok but the white fat part isn't nice ,greasy and spoiled the whole experience. Cooked one slice/rasher as directed and threw the the rest out. Although Quorn chilled rashers don't look like a bacon rasher, they are much better than these and so far, haven't been beaten on flavour out of all the vegan/vegetarian 'bacon' I've tried.

Not a good alternative

The price point is good, but the taste isn’t there. I’m not vegan or vegetarian, but I’m trying to cut down on meat so thought I’d try these. The texture and taste is nothing like bacon unfortunately. There are much better alternatives.

Had high hopes , I’m not veggie but trying to cut down on meat , this was awful even the dogs wouldn’t eat it , all ended up in the bin , still having flashbacks !!

no matter how much i cooked this i couldn't get it to crisp up. Result was an almost slimy strange textured 'thing' that set off my gag reflex. couldn't face another go with the rest of it so it went in the bin.