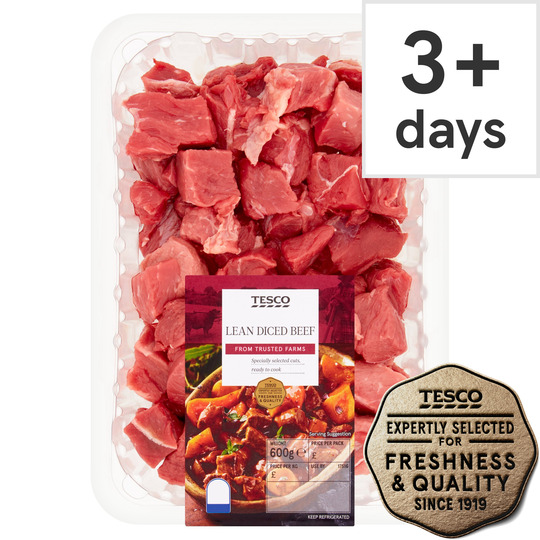 Suitable for home freezing. Ideally freeze as soon as possible after purchase but always by 'use by' date shown. Defrost thoroughly for a minimum of 12 hours in the fridge. Once defrosted use on the same day and do not refreeze. Not suitable for cooking from frozen. Follow the preparation guidelines above. Keep refrigerated.

Instructions: 180°C/ Fan 160°C/ Gas 4 2 hrs 30 mins Place some flour in a bowl and season with salt and pepper. Toss cubes in flour to coat, shaking off any excess. Heat a little oil in a large pan until hot and brown the cubes for 2-3 minutes, turning occasionally. Transfer to a casserole dish. Add your preferred vegetables and stock to casserole dish and cover. Place in the centre of pre-heated oven for 2 hours 30 minutes until tender.

Definitely not lean! the last two orders have been very fatty-some pieces were diced fat with no meat at all. I had to use scissors to trim 90% of it. I have been buying it for a while and noticed the quality becoming poorer.Sadly I won't be purchasing in the future.

Awful very fatty and even worse found those round vein things in several pieces definitely won't buy again. Took me ages to cut off the fat and nasties 😧

This meat was awful, tasteless and tough.

This meat was dreadful, tasteless and tough after hours and hours of cooking in my slow pot....Fed the whole stew to my dogs...

This was great one week, I pretty much put the whole pack in the pan. Next week, it looks like the fatty trimmings left over from the first week, no cubes of meat, just little fatty scraps, and some chunks of pure fat.

Not stewing/braising beef for slow cook only.

A mixed bag not suitable for stewing, better slow cooked for 2-3 hours. Some pieces are tender and some aren't when stewed.

Tesco really need to look at this product. It's a good price when it arrives as advertised and very tasty but quality varies each week. It becomes expensive when you have to loose up to200gr out of a pack. Recently I've had this product refunded more than once because some of the meat has started to go off so when you ring to get refund you're told we will pass this complaint on but its obviously not getting dealt with. So to allow customers to keep on buying this product please deal with the "passed on complaints"

I agree with other reviews that the quality.of thi

I agree with other reviews that the quality.of this meat varies.Most times it is all usable,no waste or fat, but I was very disappointed to receive a pack in my click and Collect that was full of fat and inedible meat and has been returned to local store for a refund.The person who picked it must have seen the poor quality.

pretty tasteless but what do you expect when its t

pretty tasteless but what do you expect when its trimmed of all its fat , but its edible i add leeks and chives at least gravy is tasty

Too much fat for lean meat

Last pack I had was excellent This week was more fat than the cheaper pack that was much cheaper per kilo I would have been better with all cheap trays. The difference was unbelievable it looked like they had run out of meat and made weight up with the throw away trimmings from other packs. Normally I am pleased . I would not have bought this pack in store but I cannot shop myself now so have to rely on the shopper.