Tesco Tomatoes On The Vine 500G 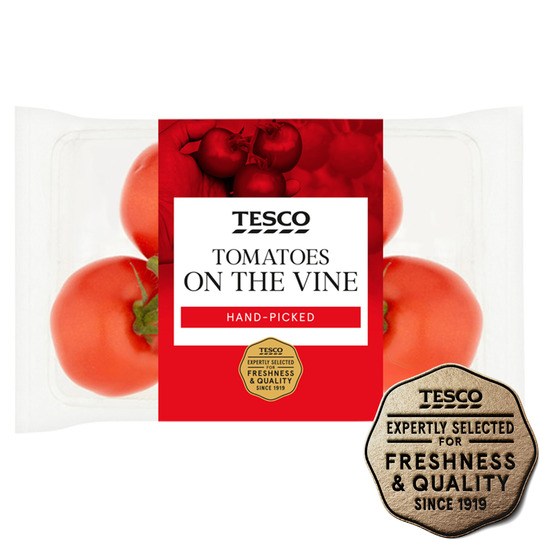 I bought these tomatoes on a regular basis as they were nice with crackers and sandwiches but the last few times they have been arriving rather overripe and soft which is disappointing!! The pickers at Tesco do not seem to care about quality control.

They were beginning to rot significantly only a couple days after delivery and had to throw three away. I had purchased several times before were fine. But don't think I'll buy again.

It has been a few weeks since I last ordered these and they were dreadful. I thought it may have been a one off and ordered them again. NO, not a one off, these are the worst tomatoes I have ever tasted. In fact there is no taste, high water content and flavourless. Never again.

Purchased in store. Thought I had chosen a firm undented pack. Much to my disappointment 4 out of 5 were dented & soft in parts & one was split on the bottom of the tomato. I’m sure it’s the way they are displayed. Pack upon pack . Tomatoes need to be handled with care. Returning to store.

way too big, there was only 4 in my pack,any taste is diluted went furry after only a couple of days

Mouldy, with 6 days to go before "use by" date.

Just taken delivery on 26th July. One has already gone a bit mouldy even though the "use by" date is August 2nd! I've lost count of the number of times we've ordered tomatoes (every conceivable variety) from Tesco only to find some problems almost every week. We can cut the mould off and use the rest of the fruit (they're fairly large) but this really is unacceptable. For fresh fruit and veg Waitrose is now a much better option and cheaper by weight as there is no wastage. My wife believes that the Tesco process is storing some vegetables in temperatures which is causing some to freeze, and this is damaging the produce. I don't know if that's true, but there's something desperately wrong in the way Tesco are storing some produce.

Very VERY large tomatoes. Not soft and squishy, and SO tasty too. ½ of one fruit is enough for a sandwich! Well worth the money.

I love these tomatoes. I eat a whole one like an apple, its so yummy. Adding more packets to my list.

I keep trying these in online order but every time they are not edible as bruised an damaged, so into pig bin!!