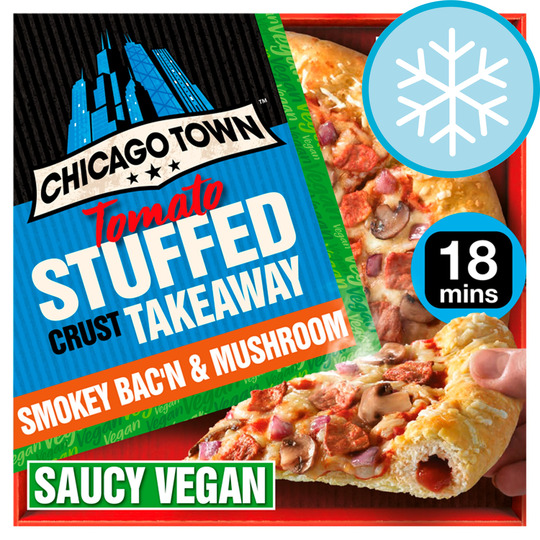 of the reference intake*
Typical values per 100g: Energy (as consumed) Per 100g

See Side of Pack for Best Before End.Keep Frozen and Store Flat. Do Not Defrost. Keep at -18°C or Cooler.

Made in the United Kingdom using Vegetables from Different Origins

Each pack contains one pizza, one pizza serves 2 people

Absolutely full of saturated fat. Half a pizza is 60% of the daily recommended amount. It leaves fat all over the oven tray which is a nightmare to clean up. Tastes nice but very unhealthy so will not be buying again.

Lovely, better than some meat pizzas

Better than MANY meat pizzas I used to eat back in the day before I was vegan. I always liked the idea of the meaty pizzas when I used to eat meat but so often the idea was good but the reality was bad. This stuffed crust pizza has an awesome crust, great taste and doesn't involve animals kept in barbaric conditions. WIN!

Absolutely love this. Really tasty. For those who say; why have substitute meat products; it’s good to have ‘Crossover foods’. If you’re brought up eating meat day in day out and get used to certain flavours and textures, it’s a tad difficult to just switch to a completely new diet. Why that irritates some people - I don’t know.

I was surprised at how heavy this was. Very tasty but topping is quite sloppy and messy, so knife and fork required. Bacon-like bits go crisp in the oven and taste super good.

You are missing the point. The fact that it tastes like bacon will hopefully encourage people who like bacon, to switch to non animal alternatives. Then the number of animals being raised as food will slowly diminish. The more products they make that are good meat substitutes, the better for all the animals. It's great so many delicious alternatives are now available. Be grateful for all these options which are becoming better and better at imitating meat.

Really good, I was impressed! It's great to have convincing vegan alternatives now so that people can choose a vegan option without compromising much on taste - isn't that the point? If you're someone who enjoys meat, but would like to eat less or try and give it up, then give this a go! This really fills the urge for when you want a takeaway-style pizza.

I'm a vegan for a reason!

Tastes just like bacon, I was hoping it really would not but it did, disgusting. Why would a true vegan want to eat something that tastes of bacon? Pork/bacon is the epitome of a carnivore, bacon sandwich, pork chops, spare ribs, roast pork. Millions of pigs are murdered every year and that fact alone was the driving force of me becoming vegan, and then we have this replicating it to the letter, and you supposed vegans are giving it rave reviews. Shocking, you should be ashamed of yourselves.

Wow, I love all the vegan alternatives, this is de

Wow, I love all the vegan alternatives, this is defo up there with one of the best I have tried. Its not gluten free which I like, the base is fluffy and the toppings so tasty. Being allergic to dairy I have never been able to have a stuffed crust, have to say, I like it!