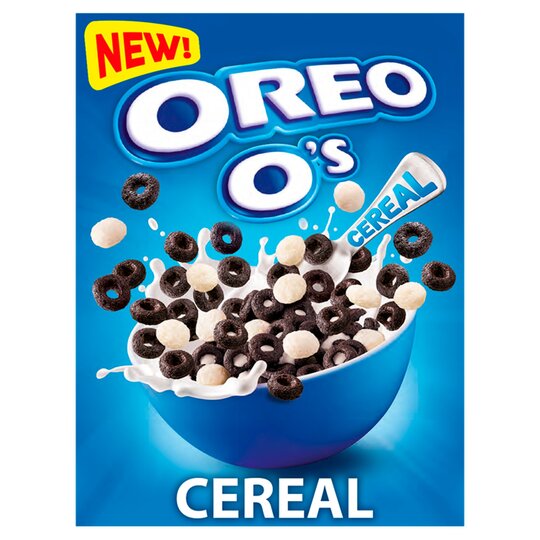 1%of the reference intake
Saturates
0.3g

2%of the reference intake
Sugars
8.1g

of the reference intake*
Typical values per 100g: Energy 1619kJ/

I love these, they're ten times better than Nesquik and Weetos which taste like sawdust these days. I was gutted when they stopped importing Oreo O's in my native Iceland so I'm hoping and praying it'll stay on the shelves here in the UK. People complain that it's not sweet enough but that's fine by me, I don't need marshmallows in my cereal. Price is slightly ridiculous, though.

Bland, thought it would taste a bit like Oreo’s 😅

Bland, thought it would taste a bit like Oreo’s 😅

Having grown up eating the original Oreo O's from post like 15 plus years ago, I got incredibly excited seeing these on shelves again after they stopped being produced by Post. I decided to give these a try for the nostalgia trip, but sad to say that these were an absolute dissapointment for people trying to relieve their childhood memories of saturday morning cartoons and sugary cereal. They were bland, smooth and a complete a mockery to their former selves. It has lost its shattering crunch. The actual pieces of marshmallow that formed the white part. Now they are simply just cheerios wearing the colours of oreos. If I wanted to buy cheerios, I would have bought cheerios. My childhood is in shambles and my weekend is ruined. I'm sorry but I can't recommend this to anyone in good conscience. Maybe I'm expecting too much, and the current incarnation is held back by things such as the sugar tax. Maybe I'm in a dark place right now and projecting too much. However, I strongly believe a new generation of children would have grown up completely fine without having this abomination of a product in their lives.

For the price I was expecting these to be amazing. To be honest I'm not sure how they even label it 'Oreo' because it couldn't taste anything less like them. It just kind of feels like eating sugary charcoal.

So, these are fine as a sweet cereal, some of the reviews here say 'bland' or compare them to other chocolate cereal but they're missing the point. Have you had an Oreo? The biscuit isn't very chocolatey really, it's a dusty-ish analogy of chocolate, very American. The dark hoops in this cereal are basically the same so as an Oreo cereal it satisfies the brief. BUT, the white 'pucks' - terrible idea. I get there's an attempt to replicate the icing of an Oreo, and the flavour is there (mildy vanilla-ish), but they soften almost immediately. Within a minute the hoops are slightly softer, but the icing pucks are total mush. It's not pleasant. Not sure how these made it past basic R&D/tasting. The hoops are wheat, the pucks are rice. Doesnt take a rocket scientist to see there's going to be a pretty big absorption difference. It's pretty gross and the only way to actually enjoy them is to eat them fast, or hoover up the white ones quickly. I don't like having to strategise my consumption of a bowl of cereal. If they sorted out the discrepancy of softening I'd probably give these a 3.5, not remarkable but ok, but as is I'm going for 2 starts (would do 1.5 if I could). Just but some Oreos for a fraction of the price, and dip them in some milk.

Was disappointed on the taste of these. Ok fair enough I don't like chocolate cereal but the white chunks had no flavour in them are quite bland. The chocolate ones in here there very strong chocolate flavoured. If you like nesquick this is basically it

Nice but too over priced

These were really nice but too overpriced :)

This cereal is nice if you like Oreos you’ll love this. It’s crunchy and sweet. I didn’t give 5 stars as it’s a little expensive. This cereal was bought as part of a promotion.