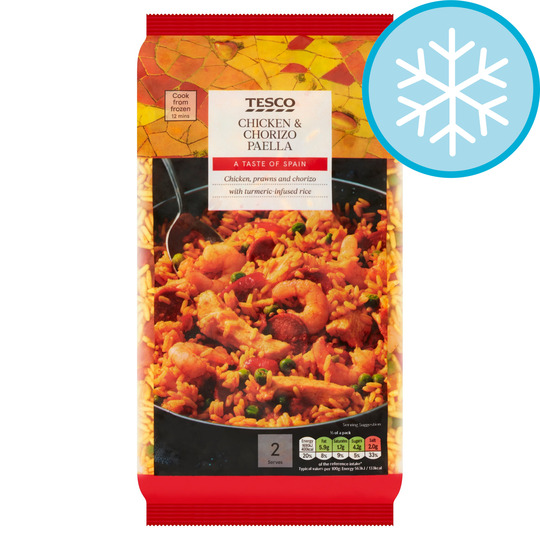 Stir Fry
Instructions: For best results cook from frozen. Add the contents of the pack to a pre-heated frying pan or wok. Add 2 tablespoon of water. Stir fry over a high heat for 2 minutes, then reduce the heat to medium and stir fry for a further 8-10 minutes. Reduce heat if necessary.

Made using chicken from Thailand, Made using pork from
Made using Thai chicken, EU pork and prawns from Vietnam.

Caution: Although every care has been taken to remove bones, some may remain.Caution: This product contains raw prawns which will turn pink when cooked.

bland, with less chicken & prawn than before.

Yeah, I was wondering what changed. Reading the reviews, other people are experiencing the same. I cooked up half a packet of this and there was no chicken or prawn. I thought it somehow ended up left in the other half, but no - it looks like Tesco are very tight fisted with the meat these days. Also, I don't remember it being so bland and having peas before? Maybe it's the mandela effect.

if i could give 0 stars i would

Used to love it now its just bland, will not be buying again

Have had this many tines before, but where has all

Have had this many tines before, but where has all the chicken and prawns gone! Absolute rubbish meal just consisting of rice, peas and chopped red pepper. Will not be purchasing this again.

Where is the meat?

I found this quite tasty but was disappointed by the amount of Chicken: 1 strip, Chorizo: 7 slices, Prawns: 3. I thought mine was just a bad batch but reading the other reviews, it seems the norm. I wish I had tried the old recipe!

Originally this product was not bad but recently the proportion of rice to other ingredients has increased. It seems to have less chicken and hardly any prawns, in spite of the packet saying they should be 5%. That is not overly generous but last week there were no prawns at all and tonight there were only two in the entire packet. This makes it very bland and tasteless. I shall not be buying it again.

Changed for the worse!

Not as good as the original version. Totally different flavour, and way to sweet with a funny tang. Doesn't taste like a Paella any more :(

First time we had this last night. We find chopped in two small onions as well to bulk it up so it was nice but as said it was bit tight with the prawns (3) chicken (4) and choriso (3). But a quick paella meal for two for 2.50 I think was ok value wise. 😊

I have been buying this paella for years we eat loads of it its so tasty. Until now, its been put in a new bag & all the flavour has gone its so dry hardly any meat or prawns anymore I had two bits of chicken two slices of chorizo & 3 prawns. So much has been taken out of this now. So disappointed I wont buy it anymore I would have rather kept it exactly the same & paid more for it. I have thrown my two bags away as its awful. Tesco please bring the original one back.

Not as good as Birds Eye.

Used to have the Birds Eye version. This one hasn't as many prawns & is too spicy. If you just want one portion, it's difficult to split up.

This paella USED to be a firm favourite! Was truly disappointed to see that it has been changed, no squid and hardly any seafood. Now Mainly just rice! Please go back to old recipe!