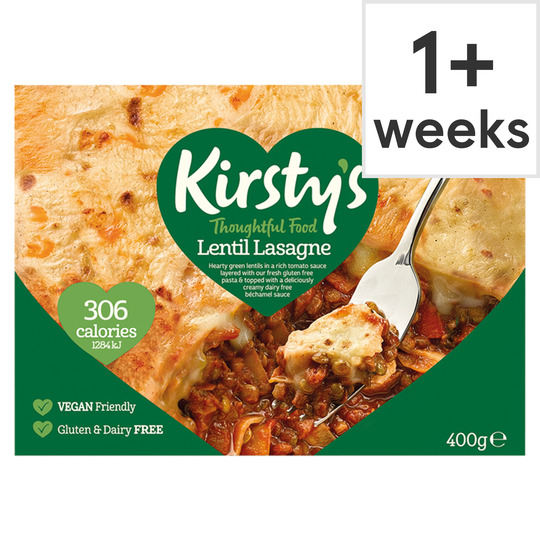 13%of the reference intake
Saturates
5.8g

29%of the reference intake
Sugars
7.7g

23%of the reference intake

Keep refrigerated. Use by date is indicated on front of pack. Once cooked, consume immediately. Suitable for home freezing. Freeze on day of purchase and use within 1 month. Defrost thoroughly in a refrigerator before use. Do not re-freeze.

Cooking Instructions
Instructions: The following are guidelines only. Cooking times may vary. Always ensure the product is piping hot throughout before serving. For best results oven bake from chilled. Do not reheat.

Oven cook
Instructions: Preheat oven to 190°C, 170°C fan oven, Gas Mark 5. Remove outer packaging and film lid. Place on a baking tray in the middle of the oven and heat for 20 minutes. Stir and serve.

Made in the UK with Lentils from Canada and France

Not so bad after all!

Reading some of the reviews for this I was dreading eating it! However once warmed up I did encounter the 'liquid' but just tipped it away and then put the lasagne back in the micro with the film peeled off and gave it another minute and it turned it quite crispy and dried out the sloppiness which made it much nicer to eat. Bearing in mind the pasta is gluten free and the sauce dairy free you are not going to get the normal taste of a cheesy lasagne. Would eat it again, especially if I was dieting and wanted a filling low cal meal.

Undercooked hard lentils and overcooked pasta which is like mush. There's not anything good about this - binned it.

I see and understand all the one start reviews but as a vegetarian who is currently on a diet I absolutely love it! I put some hot sauce in it too. I don't think it's tasteless, I think most ready meals and restaurant food are a bit overseasoned. Yes I would love cheese on it too but then it wouldn't be 306 Kcal. 4 stars only 'cause it could be a bit cheaper.

Not something to buy again

I found it rather tasteless, watery and under seasoned although my daughter thought it was ok. Most went into the bin

Awful - neither healthy nor tasty

Was sent this in error rather than Kirstys Lentil Cottage pie (which is great). One look at the ingredients list was off-putting - Ester of Fatty Acid, Sodium Metabisulphite, Hydroxypropylmethyl Cellulose are things that I don't associate with a healthy meal and this is neither healthy nor tasty - the worst GF ready meal I have ever tasted. The pasta has a glue like consistency and the Bechamel sauce tastes and smells synthetic - awful could not finish it so went in the bin. In a word - AVOID

Really not nice. Pasta was slimey. No flavour, n

Really not nice. Pasta was slimey. No flavour, no cheese. Will not buy again

Should be a law against calling this Lasagne. I wish we were still in the EU so a bunch of Italians could come and boopity bappity punt this slop off the planet.

I knew I was off to a bad start when I took off the cellophane and had to drain off a load of liquid. Despite my better judgement I still went to head and heated it up. HUGE mistake. Awful taste and horrendous texture. Just a pile of slop. Certainly not fit for human consumption (or any other creature!) Tesco need to remove this item from sale

BIIIG MEESTAKE! I brought 4 on offer. 1st one microwaved = slimy mush. 2nd one oven baked = slimy mush under a cardboard tasting sheet of lasagne. 3rd one took out of the pack, couldn't stomach it, so threw out for the birds = still out there, they don't want it. 4th one in the bin = I was worried the RSPB might come round!

I was trying to move away from meat and thought I'd try this. Big mistake! It was really disgusting and I'd bought two. The second is going straight in the bin. To make matters worse both items weren't sealed properly with the film lid already lifting away on one side. I thought that might have explained the awful taste of the one I tried but reading other comments here it probably wasn't.