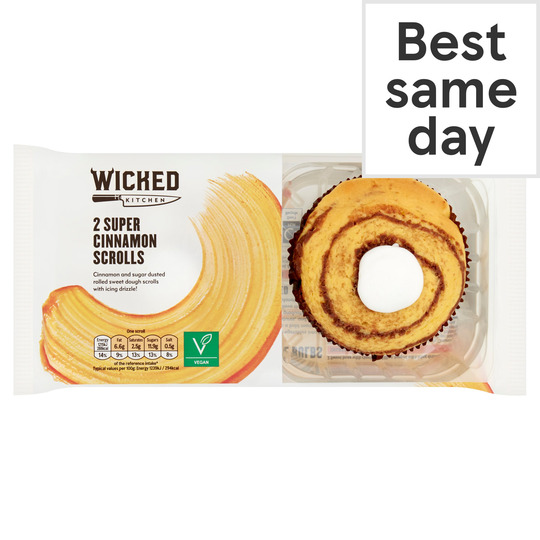 As bad as they say.

As per (most of) the other reviews these are BAD. I’ve no idea as to how this recipe got signed off, as it seems they are consistently awful - back to the drawing board on these methinks! I am only eating them as I abhor food waste, so the bin will go hungry (although he’s not as dissatisfied as I am). I’m not a fussy eater and am known to eat stuff straight out of a tin, cold beans etc., however I’m also familiar with fine dining and sumptuous pastries and these ain’t it. Buy at your peril!

Not the best I've tasted.

Yuck! Flavourless and the texture seemed raw. I looked for cooking instructions. Won’t be buying from the wicked range again.

With a little more effort, these "Scrolls" could b

With a little more effort, these "Scrolls" could be a Cinnamon Roll you could be proud of. The roll was a nice size..the flavor was okay, but... The frosting was a dry tiny blob of what tasted like hardened water and sugar. It totally lacked flavor & there was not enough of it. The roll itself was a nice size and it looked appealing; however, it lacked flavor and had a strange texture. In pulling the roll apart, you could see the crumb throughout didn't look like baked bread or roll product. The texture, especially in the middle, was gummy and almost wet. Neither my husband nor I finished eating our Scrolls and we won't be buying them again. I bought them because I thought they were reminiscent of an American Cinnamon Roll. (Have you ever had a cinnamon roll from Cinnabon in the States?) If that was Tesco's intention, nice try but the recipe needs more work. We won't be buying these again unless the package says "New and Improved."

I bought these for a coffee time treat. So disappointing, like eating almost raw dough, hardly any cinnamon flavour. After one mouthful had to bin them.

I wish I’d read the reviews prior to purchasing these. Yes, the dough isn’t great and a little raw in texture as lots have mentioned, but they literally hold no flavour. I was so excited to see something like these in the Wicked Kitchen range but am very disappointed. Sadly a product to avoid.

Very doughy and not much flavour, there needs to b

Very doughy and not much flavour, there needs to be a lot more cinnamon added to them and more icing as quite bland.

It’s like they’re cooked with a hairdryer. If you enjoy biting into raw dough with a whisper of cinnamon, these will be right up your alley. I bought them discounted and it still feels like a waste of money. Next time, try turning on the oven.

"The worst thing I ever put in my mouth"...?! Really?! Can't understand what the other reviewers are going on about. My sister and I thought these were amazing. They're nice straight out the pack but amazing warmed up in the microwave. The dough is soft and chewy as cinnabon rolls are meant to be. They aren't as strong in cinnamon as others but it isnt hard to shake some cinnamon over them if you like the taste stronger. The icing blob melts when heated and we found was plenty as we don't like it drenched in icing adding sickly sweetness and unnecessary extra calories. But if you like yours with lots of icing again it isnt hard to mix up some icing sugar and oat milk and pour over. Will buy these regularly. Well done tesco !!