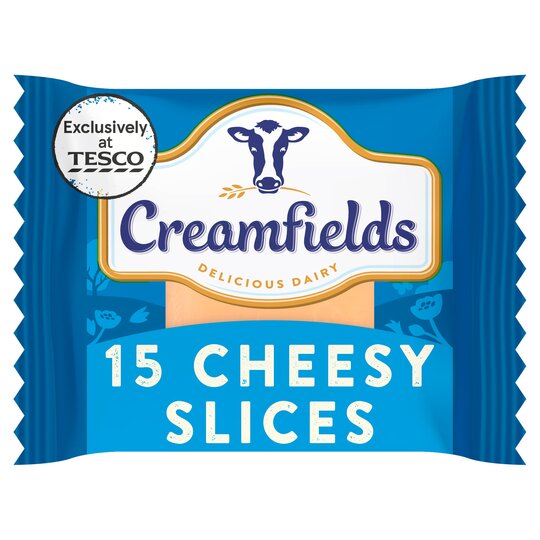 Impossible to get out of film wrap without breakin

Impossible to get out of film wrap without breaking into peices

Brilliant for many quick uses!

Given the other reviews, I feel like I have to 'defend' this cheese! ..... it's fine for the intended purpose, which in my kitchen is for that extra-layer with salad, in a bun with a hot burger (also nice inbetween lightly-toasted bread, with sliced hardboiled eggs and fresh tomatoes) ..... it's also okay for melting over some left-over pasta being reheated in the microwave - or for lining little pastry-cases, then topping with for example fried mushrooms and onions..... I suppose I'm saying it's a texture-thing rather than something you'd put on your cheeseboard :-). If you want fancy hand-crafted cheese with aged and developed flavours, then go buy that (and I frequently DO - love cheese in all its varieties!) - but for quickly adding to quick snacks for that bit of melty extra - great!

From its description of 'Cheesy' you would expect this product to have at least a moderate flavour of cheese! With a cheese (unknown variety) content of only 11% it has almost no flavour of anything, I'm afraid! Given that the nutrition traffic lights are red for each of Fat, Saturated Fat, and Salt, I could not find the enthusiasm to finish the packet. So I threw it away, much as I hate waste.

Tasteless, but not in a good way

Completely and utterly without taste. I dare anyone to try this and define its taste.

Bears no resemblance to cheese whatsoever. Tastes incredibly fake with a plastic texture cracks & breaks up easily & difficult to unwrap too. I can’ t even use the stuff to wrap up & disguise the dog’s meds as even the dog refuses this stuff. It’s not fooling anyone! I bought it rather than the usual well known brand as an economy. I thought. Never again. Absolutely awful & even my dog won’t eat it.

Grotesque and in my opinion not fit for human cons

Grotesque and in my opinion not fit for human consumption.

I HATE that Tesco review site will not let you submit a zero star review. Absolutely no taste while you are eating these slices.....and yet a weird and very unpleasant aftertaste. I can usually eat cheese slices straight out of the pack when I have the munchies. These went in the bin after a couple of slices (had to spit the second slice out).

Handy for burgers - except for fiddly wrappers.

Tesco stopped selling these cheesy slices for a while.  Now they have returned  as a larger pack.  The wrappers around the individual slices are now definitely more difficult to open.    Would actually prefer to buy this processed cheese as a block and cut my own slices.