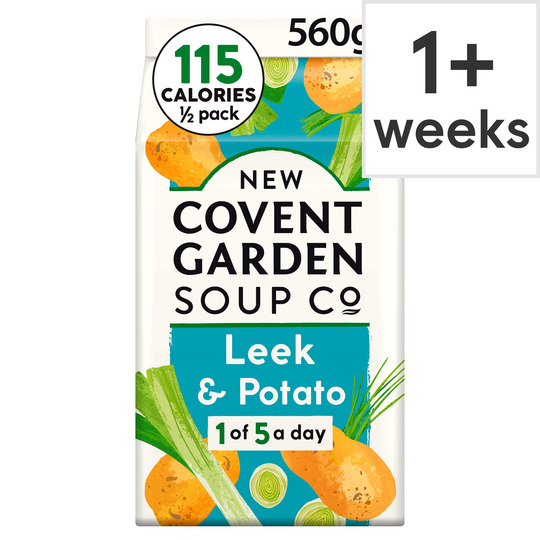 of the reference intake*
Typical values per 100g: Energy 171kJ

Keep refrigerated. Once opened consume within 2 days.Suitable for freezing. Use within 1 month, defrost thoroughly before heating and use the same day. Use by date: See top of carton.

Cooking Instructions
Instructions: Give the carton a good shake.
Be careful the soup will be hot. Let it stand for 1 minute before eating.
Do not reheat when cooled.

Lovely flavour. Was a thin soup, not too thick so we had it in a cup.

Disgusting, tasted like cold tea! was staring so added salt and worcestershire sauce to try and make it better, vile!

Best leak and potato soup I’ve ever had

We’ve had this in the past and it used to be lovely but I just bought two and they were both disgusting (four people tried it and all confirmed it was vile). Not sure if they were from a Bad batch but we won’t be trying them again to find out. The worst potato and leek soup we’ve ever had.

I bought this a few weeks ago as the soup I wanted was unavailable. We used to like it but it was absolutely horrible and nothing like it used to be. The consistency was watery and it had no flavour whatsoever. I will not be buying it ever again.

Gone downhill,(has some bought them out)?

Acceptable taste but not a winner

Not bad but the most prominent taste is leek which to my mind should be the supporting act and not the star. It is still an upgrade on tinned