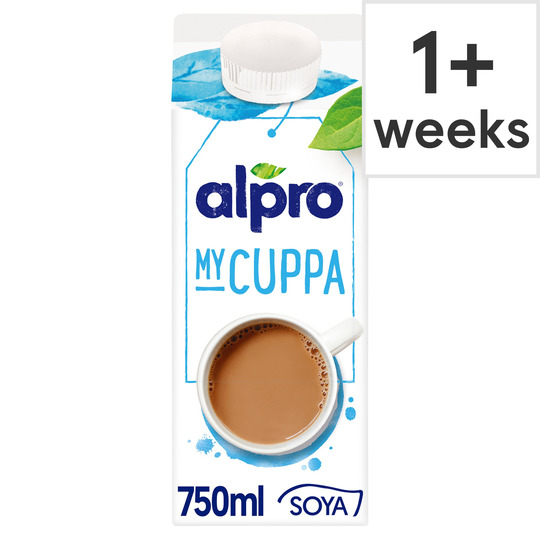 Best before: see top of pack.Keep refrigerated and use within 5 days of opening.

We've been trying to go vegan and have tried MANY plant-based milks previously. Most are great for other purposes but we have really struggled to stomach them in tea. This one has totally changed that! It tastes great, lasts well, and my parents didn't even notice it wasn't cow's milk! Please keep stocking this Tesco, it makes a huge difference to us!

I did buy it as part of a promotion. I would recom

I did buy it as part of a promotion. I would recommend it as good alternative option for dairy milk for tea and coffee. I did like the taste of the drink.

Nice and creamy, tastes nice in a cup of tea/ coffee. I would buy this again and definitely recommend.

I would buy this again. I am trying to cut down on

I would buy this again. I am trying to cut down on my dairy so thought i'd give it a try, and I liked it. I dont take alot of milk in my tea so didnt use much but I have to say, I couldnt tell the difference? It tastes slightly creamy on its own so would be good I think for coffee or maybe hot chocolate. Defo worth a try!!

Very good alternative and creamy too. Tastes very good to add for a cuppa. bought it as part of a promotion

I bought this as part of a promotion. I wouldn’t normally drink soya milk but found this quite acceptable and the carton was very convenient.

I use it in my coffee mainly and I like it; Coffee taste the same, so I will keep buying it. Bought it as part of promotion.

It is a nice milk alternative, full of flavour.

It is a nice milk alternative, full of flavour. Recommended and will be buying again. This product was purchased as part of a promotion.

Worked well in a cup of tea, and a good alternativ

Worked well in a cup of tea, and a good alternative to milk. Good value for money, tried as part of a promotion.