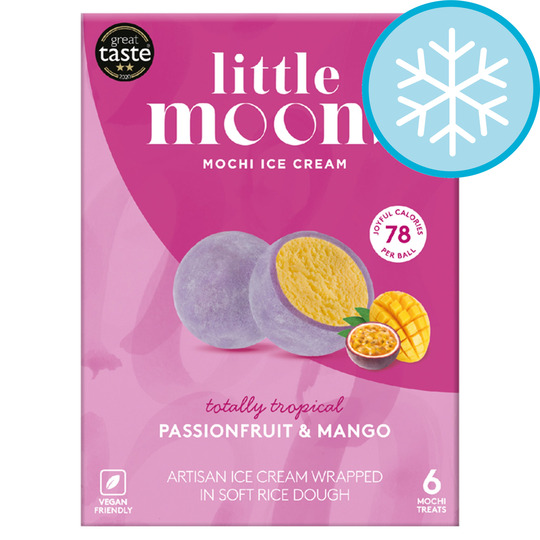 Keep frozen below -18°C. Once defrosted, do not refreeze. See top of pack for best before end.

Mochi is a Japanese rice cake made of mochigome, a short-grain japonica glutinous rice, and sometimes other ingredients such as water, sugar, and cornstarch. The rice is pounded into paste and molded into the desired shape. In Japan it is traditionally made in a ceremony called mochitsuki. This isn’t a solero ice lolly it’s a different texture, so don’t expect regular English ice lollies when buying as it’s mochi.

Not worth the hype

If you’re a super taster these might be better but to me they just tasted like a tropical solero wrapped in something chewy. I’m glad I tried them to see what the fuss was all about but they are no way worth £4.50. If they were amazing I wouldn’t mind paying that much but these are really not all that they’re cracked up to be.

Nice enough but too pricey. Don't like the coating

Nice enough but too pricey. Don't like the coating round the ice cream. The ice cream tastes like a solero so just save yourself some money and buy some soleros

Many would consider these Little Moons to be expensive for what you get, and I could be in that group. However, should they sell the ice cream alone it would be well worth it! I have made my own ice creams for 35+ years and I rate this as one of the best ice creams I have ever tried. I tried a Little Moon as soon as we returned from the supermarket (10 mins from home) when it had softened a fair bit. As said before, the ice cream was wonderful (5 stars +) for that, but eating the covering was like trying to chew unflavored bubble gum for a long time. The texture put me off and that alone would put me off buying them again. Later on, I tried them 5 minutes out of the freezer as per instructions. The ice cream was still wonderful and the covering was certainly easier to chew, but it still didn't taste any better or become easier to chew enough, to make me rush to buy them again. If the covering was thinner, that may help the chewability or texture factors and I would try them again. I do like the ice cream enough to order the coconut flavoured ones to try.

they were amazing but they are very overly priced

Yummy! I haven’t tried them yet but they look yumm

Yummy! I haven’t tried them yet but they look yummy!

Yeah they're good but in no way are they so good that they justify the price they are for sale at. The price is crazy for 6 little moons.

Little moons are very tasty and a nice treat to have a on a sunny day but when you go to look for them there usually isn’t any left. So you have to go at an early time to fetch your little moons! Go today at Tesco!

they're s delicious but when I opened them they w

Grandchildren love them but cannot buy them in Wh

Grandchildren love them but cannot buy them in Whitfield Dover store.