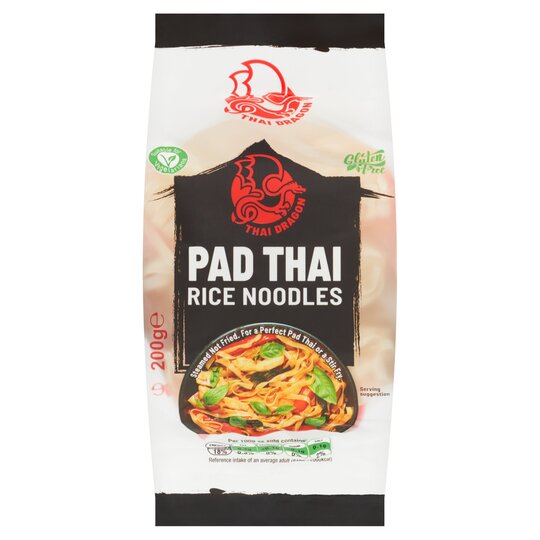 Store in a cool dry place. Once opened, store in an airtight container.

Boil
Instructions: - Bring a saucepan of water to the boil.
- Add one nest per person, cook for 4-5 minutes.
- Drain and then mix with your favourite sauce.
Appliances may vary. Do not reheat.

So nice to have rice Pad Thai noodles, hard to com

So nice to have rice Pad Thai noodles, hard to come by. To avoid sticking together try adding a little oil to your boiling water and teasing them apart. I have to do the same for most gluten free spaghetti and it works well for me.

excellent - just what I wanted for my pad thai

absolutely excellent. Used them for a king prawn pad thai. Have already ordered another pack.

Rubbish Cooked exactly according to the instructions on the pack, leathery, chewy and inedible. Spoilt our meal. Will not be buying these noodles again. So hope you can rectify this product.

Pad Thai rice noodles are hard to come by and so these do the trick for me. I haven't given 5 stars as they are not perfect but I find if I add them to boiling water for 5 mins, drain and then add straight to my main dish, they don't have time to dry and stick together. So they get a thumbs up from me

I like them! I found them a helpful GF substitute

Contrary to the other reviews here, I actually think these noodles are great! When it comes to rice noodles, which are specifically Pad Thai noodles, I haven't been able to find many choices; these might not be the best Pad Thai noodles - I wouldn't know, I'm also not the best chef out there - but personally, I found them tasty and easy to cook. I boil them for 5/6 minutes before draining and adding them to cook in my veggie-filled wok. Happy cooking!

The Tesco buying team have had a nightmare here. These are the worst product I've ever bought at a supermarket. Truly awful! The noodles seem like they're stuck together with super glue! Half of them cook ok but the other half form into chunks, causing them to be crispy and, frankly, inedible. Tesco need to sort it out! How on earth did these pass any sort of quality control?!

Good if you disentangle and cook a bit longer

Pro: it comes in individual squares so easier to handle, no need to break (and scatter broken pieces around like bundled rice sticks. Con: they're tangled together so need to be disentangled with a fork during cooking. Otherwise you'll end up with uncooked mess and crunchy middle. I break the square in half before putting it in the pot. The noodle is also curly rather than flat and straight so takes full 5 minutes or even a bit longer, otherwise too chewy. But it has nice consistency or tooth bite than limp flat ones.

The noodles stick together - won't be buying again

The noodles don't separate from each other so parts of them don't cook through and taste hard. I won't be buying again.