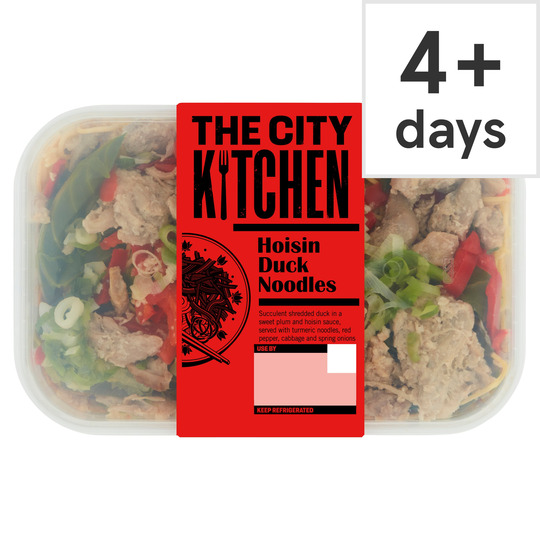 18%of the reference intake
Saturates
2.8g

33%of the reference intake

Not suitable for freezing. Keep refrigerated.

Instructions: Heating Up: Remove label and slightly loosen one side of lid.
Place in a microwave and heat on full power for 4 minutes (800W) / 3 minutes 30 seconds (900W).
Stir before serving - careful, the tray will be hot.
Before you tuck in, ensure food is piping hot.

View all Ready Meals for 1

Ruined This used to be delicious and I would buy r

Ruined This used to be delicious and I would buy regularly. Now horrid, tasteless mush. Won’t be buying again.

I wish I could upload a photo of this disgusting poor excuse for a ready meal. Described as succulent shredded duck turns out to be non-succulent piles of fat gristle embedded in a pile of noodles. Manufacturers no doubt expecting the added flavours will offset the poor quality. It’s supposed to have 18% shredded duck. I was straight on the phone to Tesco, who are always very helpful and quick to refund, and they said they would file a complaint form to the suppliers. I would have liked to contact the suppliers to send the photograph of what they allowed to pass their inspections. There is no excuse for such poor quality and lack of real shredded duck as advertised. I will never buy them again! I cook a lot of my home foods and occasionally like to try ready meals for a break, but these ready meals were nothing but an insult to my palate.

What Have You Done?

Certainly less duck, less hoisin and the veg is not as plentiful nor as tasty as it was. This has been changed and bulked out with far too many noodles in a cost-cutting measure. Not a lot of flavour. Shame, this used to be nice.

Very tasty , try to buy it every week but often ou

Very tasty , try to buy it every week but often out of stock for delivery very disappointing on that front .

To much pickled ginger, again

Really like this meal however the amount of Pickled Ginger in each serving varies so much that sometimes it is virtually inedible. Cut down on this please.

Will not buy again!

I used to buy this all of the time but it has really changed. The last time I had to pick out the red peppers as they were vinegary and totally wrong. The different ingredients of the dish are added to the container in little piles every item is slightly separated from each other this wouldn't be a problem but it allows you to see the duck is just a mush and in no way looks like pieces of meat. This used to be one of my regular ready meals but will not be bought again.

Too many noodles not enough sauce and the duck mus

Too many noodles not enough sauce and the duck must have gone on holiday!!

Tastes just like a Hoisin Duck from the takeaway.

If i could raye a minus i would , smells disgusting, tastes disgusting and how they can say duck....good luck with that one

Not what it was

Used to be really good, but has become vinegary and the spring onions seem to have disappeared.