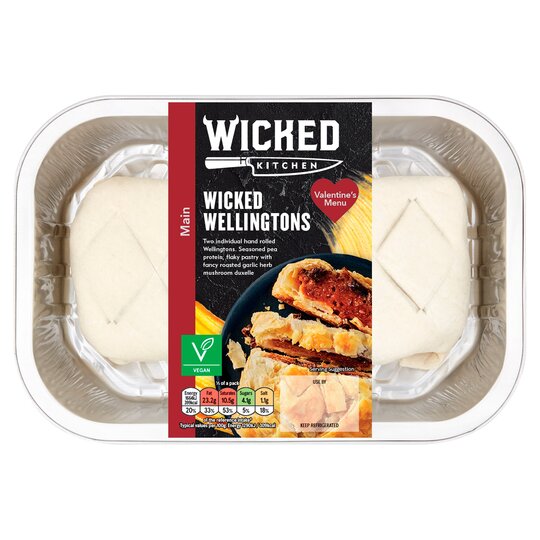 Fabulous flavour. Please make this a regular feature of the Wicked range

These were not like any wellington I've ever had before. Cooked according to the instructions, and basically the top later of pastry disappeared, or became so thin and translucent it appeared to have done. Also, the wellingtons were swimming in oil after about 15 minutes cooking, more than you'd believe they could hold, so be sure to cook it in something that can hold a flood of oil. I poured the oil off, and the base of the wellingtons was still a bit greasy when served. However, it tasted wonderful, so all is forgiven! I would recommend serving with some sort of gravy or sauce, as it's disconcerting seeing the filling through translucent, almost non-existent top pastry!

Hadn't realised these were pea protein (whatever that is) not beef until I was putting them in the fridge, but as we often eat vegetarian and sometimes vegan decided to give them a try. Very odd flavour and texture. I managed to eat mine as the taste was less shocking once you were used to it, however my partner only had some pastry from hers and our son gave up after one taste, so the vast majority went in the food recycling.

Not sure that some of the below reviews should count...you can't review a product as 1* because you didn't realise it wasn't meat! I really enjoyed this, it was quite small for a main but fine if you have other stuff with it. My husband is an ardent meat eater and even he enjoyed it! Nice to see Tesco making the effort to include Vegan food in their meal deal - yes it's got palm oil, but they've got to start somewhere!

Inedible. Both went in the bin. Zero stars Total waste of money

Banging as usual, rarely disappointed by anything wicked make as the food is always interesting and tasty. Don't be put off by the people who are clearly colourblind and couldn't see the massive green vegan sign on the packet. Delightful, 10/10, 5*, two gold stickers and high five.

It was very disappointing. I also didn’t realise it didn’t have meat in it. I certainly wouldn’t buy this again. Tasteless, this is the only time I have ever known my husband to leave anything !!

Having read the other reviews after purchasing thi

Having read the other reviews after purchasing this, I was expecting it to be dreadful, and almost didn’t bother to use it. However, I am so glad I did because it was delicious with a lovely flavour. It did have quite a strong flavour but that was expected with porcini mushrooms. Both my husband and I thoroughly enjoyed it and would definitely buy it again

Don’t buy these, you have been warned!!

I have to agree with the other reviewers. These are awful, very greasy and the pea protein has the texture and flavour of rubber. I received two packs as substitutes in two ready meals I ordered and had the first last night and found it inedible, the second pack has gone in the bin with the remains of the first. Not worth the 1 star I had to give to post this review!