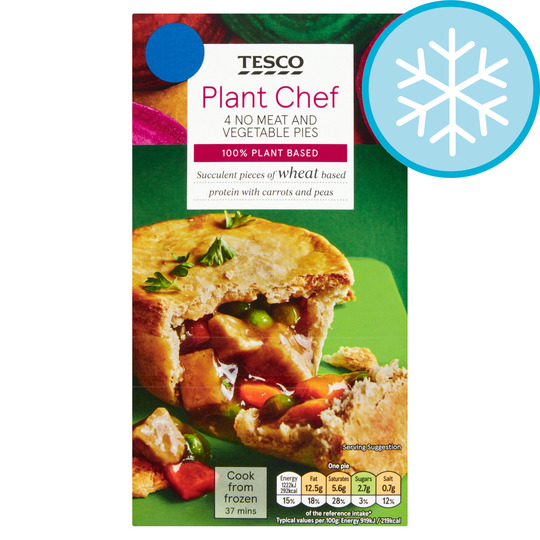 Instructions: 200°C/Fan 200°C/Gas 6 30-35 mins Remove outer packaging. Leave in foil tray. Place on a baking tray in the centre of a pre-heated oven. Bake until golden brown. Leave to stand for 2 minutes before serving.

We didn't like these pies - they had a strange, almost bitter taste (which I think was the gravy). We also struggled to get the pies out of the foil tins. The texture of the filling was ok. We are not vegan or vegetarian, eating fish or chicken 1-2 times a week - however, we do like to reduce our meat intake. We do not expect veg-based food to taste like meat - we just like it to taste good. We have tried a lot of Tesco's frozen vegetarian/vegan range and have really enjoyed other items - however, we will not be getting these pies again.

Not as bad as everyone is making out.

Didn’t mind these at all actually, they’re not as bland as people are making out and they weren’t watery or measly. Polished mine off anyway. I don’t want it to taste just like chicken either so that’s not a gripe for me. I don’t know why people are moaning about these budget pies, you get what you pay for and cheap chicken pies are just the same. Spend more if you want more, but these are fine for a quick pie ‘n chips lunch.

My partner, who is a vegetarian, tried one of these and it was so unpleasant that we threw the rest of the packet away. Pastry is the main ingredient with a very brief filling consisting of three or four pieces of squidgy, flavourless "wheat based protein", 2 peas and two miniscule thin slices of carrot, no more than 1cm long, all swimming in a very strange tasting liquid. Looking at the ingredients the vegetables were listed in the middle of the ingredients with water at the top. Come on Tesco's put some flavour and vegetables into your pies as 2 peas and a couple of carrot slivers do not a pie make!!!

Bit of a disappointment

Not nearly so good as the Plant Chef No Steak pies, which I do like a lot. These have similar pastry - crisp flaky top, soft 'bottoms' - and plenty of filling. The veg are fine. But the 'no meat' chunks, which are kind of chickeny I suppose, are all but tasteless and lack much in the way of al dente texture. As usual with Plant Chef products, opinions of reviewers do differ very widely. But not something I would buy again, or recommend.

Could get the pies out of the tin foil bottom, Ended with mush it's a shame because we have always like these. Will not buy again.

V Good, liked the taste, but pity I just tried to order online but not available.

There was very little filling in the pie. The pea protein in the pie has the texture of mashed potato. The pie was also very bland. I won't buy this product again.

These pies are lovely. Lots of tasty filling and pastry just right and light. Tried lots of Vegan pies and these are definitely one of the best.

No taste, would not recommend

I got this as a substitute for the Linda McCartney pies (which I love and would recommend). The pie had no taste and the pastry also had a weird heavy tasteless texture. Would not recommend. Shame as other Plant Chef items have been good.