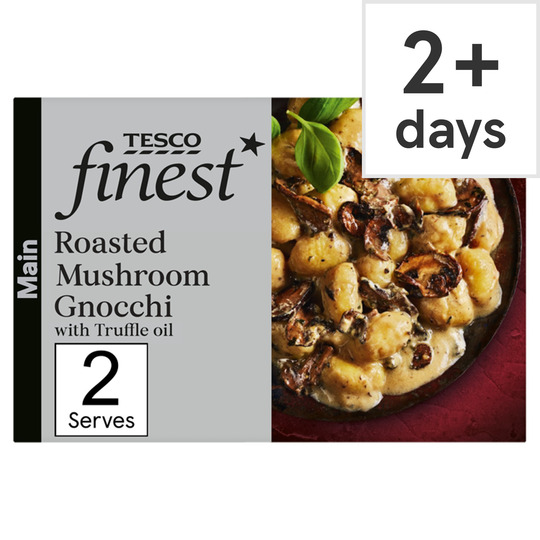 Keep refrigerated. Do not freeze.

Instructions: 190°C/Fan 170°C/Gas 5 Remove outer sleeve and pierce film lid several times. Place on a baking tray in a pre-heated oven for 25 minutes. Remove film lid, stir and heat for a further 5-10 minutes. Leave to stand for 2 minutes after heating.

Instructions: Not suitable for microwave heating.

Awful though mushrooms good but not much of it. Sauce tasty but too much of it Gnocchi went to the bin

I didnt think Tescos veggie main could be any

I didnt think Tescos veggie main could be any worse then the last one they offered until i tried this. The sauce and mushrooms were ok but the rest was tasteless and i threw it away. As other people have said why cant Tessco make a decent veggie option ? A simple pasta or even a pitza or veggie burger would be better then whatever this dish was suposed to be.!

Shocked this has got so many bad reviews, i loved this dish and thought the gnocchi was lovely. Tastes very creamy and the mushrooms were delicious. I do agree that there should be more options for vegetarians though. Maybe a lasagne, a filo pie, a pasta dish, a vegetarian chilli? Just shooting some ideas. Would buy this again though. Nice one Tesco.

Massively disappointed with the vegetarian options

I am hoping to see a better vegetarian selection. Just because people are vegetarian don’t assume they eat anything without meat in it 🙁

Truly awful, threw it away after a couple of mouth

Truly awful, threw it away after a couple of mouthfuls. Pity the mushroom stroganoff was discontinued as that was infinitely nicer.

Just horrible! Mushrooms on their own would have been OK but this dish...overall yuck!

Worst ready meal I have ever tasted. Threw it away. Scant thinly sliced mushrooms - maybe 1 tblsp between two people. Gloopy sauce, what a waste of truffle oil.

It's not THAT bad (re. other reviews & compared to other vegetarian Finest Meal Deal mains which are truly awful and unimaginative) although the gnocchi is much too heavy & stodgy. Why oh why is it so difficult for Tesco in this day & age to be able to provide nice vegetarian meals. I don't mean meat/chicken substitutes either (e.g. Quorn) as I don't like meat or chicken. Come on Tesco!

Same flavour as the preceding stroganoff, but with far less mushroom and a lot of rather chewy heavy gnocchi, so more empty calories. And it'd be nice if vegetarians weren't stuck with mushrooms or nothing for every "finest" meal, I don't particularly like them.

This is a truly awful gnocchi dish. I was taught to cook gnocchi in Italy and gnocchi needs to be pre-cooked before being added to sauce and baked in the oven. I do not believe this gnocchi was pre-cooked, it was hard and chewy. Ghastly and disappointing, a complete waste of money. Don't order it.