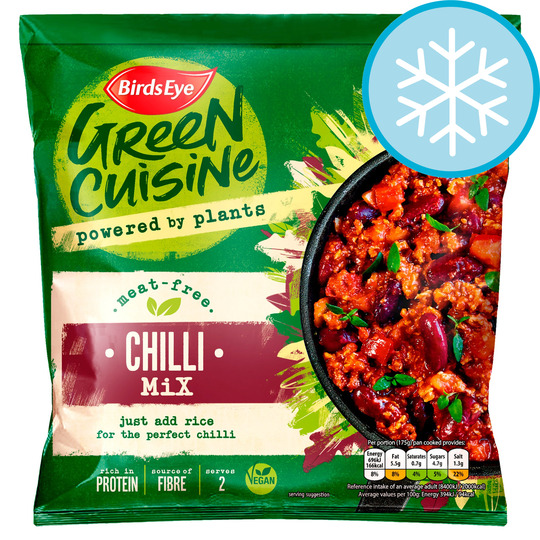 Hob
Instructions: Tasty when Pan cooked straight from the freezer.
Low/Medium Heat 8-10 mins
Empty the contents of the bag into a wok or non-stick pan.
Cook gently on a low to medium setting stirring frequently until fully cooked.
Simply add the mix to rice for a delicious Meat-free chilli
Please ensure food is cooked until piping hot.
These instructions are guidelines only.
Do not refreeze after defrosting.

Very tasty, but won't be buying again until you st

Very tasty, but won't be buying again until you stop using plastic trays..

Added mushrooms and tinned tomatoes, and chilli powder as Id more than likely diluted the spice with the tinned tomatoes. It was a little watery maybe half a tin of tomatoes would have been better, or if id boiled some rice, but it was a quick meal in a rush. Put it on wraps, with grated cheese, chopped onion and sour cream (this is where the rice would have benefited in the wraps so it wasnt as watery) but it was really nice, Im aiming to do 1-2 meat free meals per week. I cant commit to vegan (yet) and it was quick and easy when we needed to eat in a rush.

Not enough for two! Add chopped tomatoes and pepper or a tin of tomatoes or anything you fancy to bulk it up. Nice taste. Shame about the added sugar, no need for it with carrot juice etc. Gives it a sweetness that is a bit unpleasant in a dinner... Fine for a sweet.

Very tasty. Not a huge amount but I added some mushrooms. Made a tasty meal with some rice. Would buy it again.

Very tasty, but a bit on the hot side for me. I thought I would try to move away from meat products, so I thought I would give this a go. There were too many kidney beans for me, it was loaded with them which is why I gave it a 4 star. Very tasty though. I would say that once this had melted down in the pan there would be enough for 1 person or two very small portions. Worth a try on offer but I don't feel it's worth the full price.