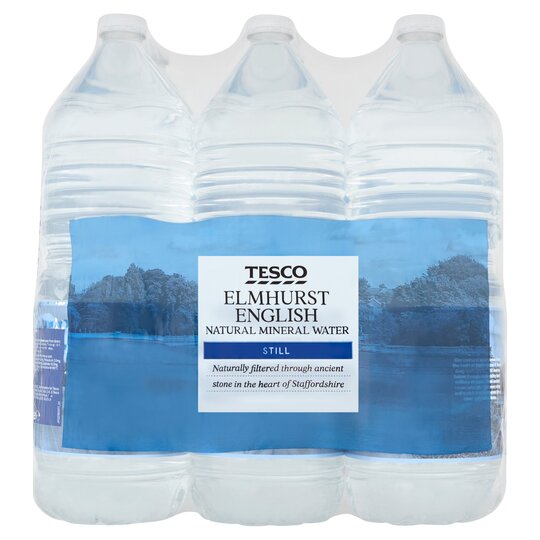 It’s basically as bad as tap water, kettle furs up with calcium deposit on first use and so bad for our sick cat that needs filtered calcium free water

I used to buy Ashbeck 6 pack 2 Ltrs each for years.I was shocked to see it was replaced by Elmhurst. When I tried Elmhurst it felt like drinking salt water. I am struggling to find an alternative to Ashbeck. Please Tesco, bring back Ashbeck. We love Ashbeck water.

The fact that they designed the packaging design/colours/font and price and store location to make it look like Ashbeck is dishonest to say the least. It’s not the same product at all, Ashbeck is far superior, this is the same as all the other rubbish bottled water. I gladly paid twice the price of the Chase Spring water for Ashbeck water, but not for this. So we are just making do with Chase Spring water until Ashbeck comes back in this size. Bring back Ashbeck!

Elmhurst tastes horrible, when bought mistakenly thought it was Ashbeck that we have been buying for 5-6 years. The bottle and label look so similar to Ashbeck. RETURN ASHBECK BACK!

Not good never even realised they had changed until my kettle started to scale up after a week. Then noticed it used to be Ashbeck water will not be buying again and returning what I have bought

Wouldn’t even give this water half a star , tastes vile **BRING BACK ASHBECK**

I mistakenly bought it, thinking it was the Ashback. It has a different, worse, taste and has a higher dry residue, which is bad for kidneys. I'm going to return it and buy the 5lt, which is still Ashback. It's really a shame they switched to this Elmhurst which must be cheaper for them (but sold at same price to us), as normally water with higher dry residue costs less.

I have been buying Ashbeck bottled water for years to put into my kettle as hubby drinks only black coffee. Now it has been changed to Elmhurst bottled water its awful. Within a few days there is a scum on the top of hot drinks and the kettle already needs descaling, which I have never had to do since buying the kettle. Everything about this water is awful the bottles are always bashed in and terrible to open and when you manage to get them open they horrid to use in the kettle. I will have to look elsewhere for an alternative. A total waste of money!!

No star to elmhurst

After ashbeck undrinkable Before so many times despite family wants to go diferent shops i always said we need go to tesco as we need water . Snce there is elmhurst no more