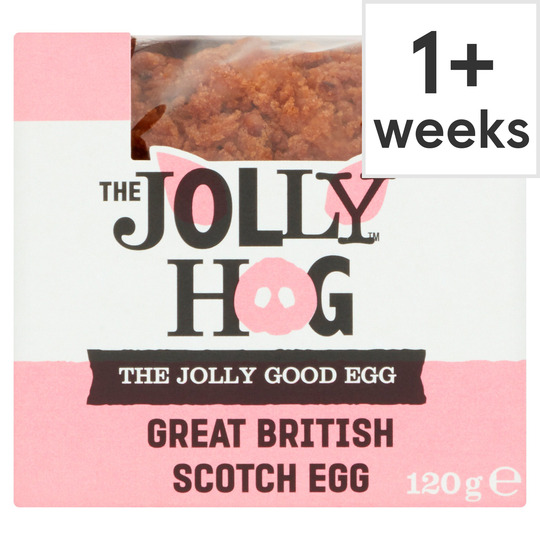 Do not freeze. Keep refrigerated below 5°C Use By: See top of pack. Once opened consume within 2 days and do not exceed the use by date.

Oven cook
Instructions: Can be served hot or cold. Remove all packaging. Place on a baking tray in the centre of a pre-heated oven 200°C/Fan 180°C/Gas Mark 6 for 13-16 minutes. All appliances vary these are guidelines only. Not suitable for microwave cooking.

Made in the UK using British Pork and Egg

Lots of flavour, delicious runny yolk, crisp crumb. Just what you want from a scotch egg!

Best scotch egg I have tried

It may seem a bit pricy for one but it's understandable when you try it. Most scotch eggs can be quite dry/bland but this was genuinely the best scotch egg I have tried. Packed full of flavour from the sausage to the egg.

The best tasting sausage meat surrounding a lovely not too runny yolk. These scotchies beat any of your mass produced efforts into touch. Quality not carboard tasting.

You have got to try them

Worth paying a little extra, these are absolutely delicious 😋

The best scotch egg out there

It has a gooey soft yolk which I love. Particularly great when I warmed it up in the oven - went all runny!

Not so 'Jolly' - and far from Great'. I decided to pay a (very) premium price in the hope this scotch Egg would offer something of a unique taste experience from the standard product - being a fan of scotch eggs generally as I am. Big mistake. I found the sausagemeat to be coarse and gristly, the part-liquid yolk to be of an unpleasant taste and texture - and I thought the product was underseasoned too.. Save your money and stick to the standard (and far superior) Tesco's own variety - the cost of which for a packet of four is actually less than the price of a single highly unsatisfactory Joly Hogg Scotch Egg.

This scotch egg is sooo tasty. Gooey in the middle & the sausage meat tastes amazing.