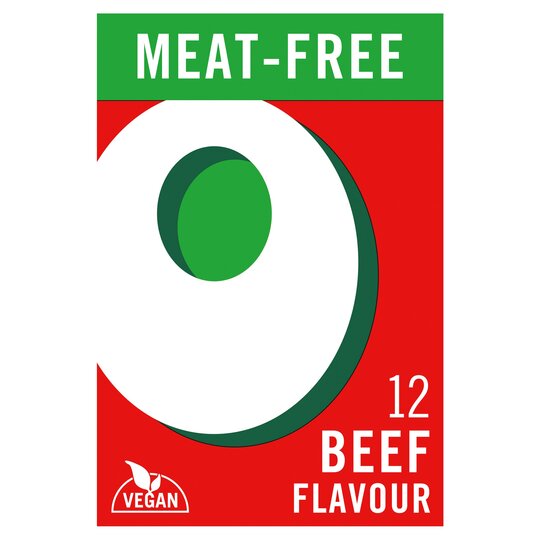 Each 100ml of prepared stock contains

Store me in a cool, dry place.

Once it's all blended in, you can hardly tell the difference, although it's pretty salty. And some of the ingredients don't seem great for the planet. But having no beef is a step in the right direction.

AWFUL. I usually use oxo veg cubes in a lentil and veg stew/casserole so thought I'd try these. So strong I couldn't eat the stew and I chucked the rest of the box. UGH

Good taste, well constituted so no need for the re

Good taste, well constituted so no need for the real meat one. But I would hope for a gravy without MSG too. That would be really something. Bought as part of a promotion

I will buy these in future as they don't taste muc

I will buy these in future as they don't taste much different to the meat ones.

Was ok but the flavour was not very strong

Was ok but the flavour was not very strong

Loved them, couldn’t tell a difference from the me

Loved them, couldn’t tell a difference from the meat version.made the meal taste brilliant.

Good taste, couldn't taste the difference between meet free and original. Bought in part of promotion

Added great flavour to my curry

I made vegetarian curry and added couple of Oxo stock cubes to it along with little bit of my own spice which I always used in this curry. The flavour was enhanced by the stock cubes, I have never used beef stock cubes before so don't know how they taste but these vegan ones tastes very nice. I got them cheaper as a part of promotion so that was even better.

Bought as part of a promotion as never used it bef

Bought as part of a promotion as never used it before, but it worked just as well as meat based stock cubes and tasted surprisingly meaty too. Due to this it exceeded my expectations and is something I would buy again.