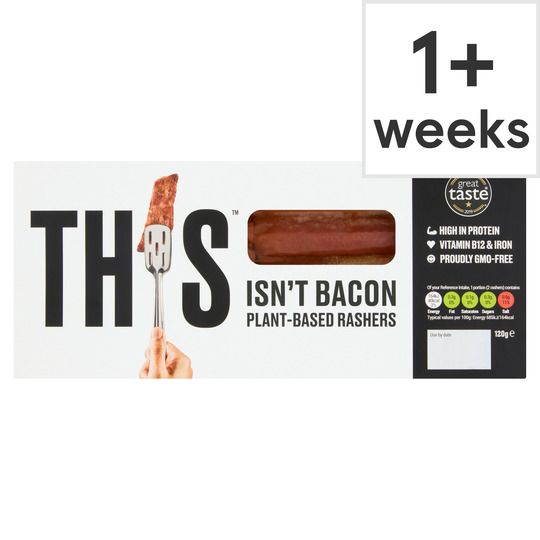 Store chilled 0-4°C. Eat within 3 days of opening.Suitable for freezing - freeze on day of purchase and do not refreeze. See front of pack for use by date.

Shallow Fry
Instructions: For best results: Pan-fry for 3-5 minutes - or until crispy, with a teaspoon of oil.

This does not fry like bacon alternatives that are designed to look like and act like bacon in the pan. These are very chewy, flavourful rectangles that have a shear profile like a very firm meat-like substance. Cook them until the edges are crisp. They are hard describe because the name tries to associate them with rashers - they are not, they are something else. They are chewy,smokey bars. I liked them on their own with nothing else. You could also put them inbetween buttered bread by themselves.

Not good at all, we cooked them as per packet instructions and all we ended up with was very dried out burnt tasting strips of cardboard, that went in the bin We’ve cooked many varieties of veggie / vegan bacon substitutes and these are by far the worst. Thought because of the price they’d be better quality, but unfortunately not, thankfully they were on offer …

This was on offer and is the first bacon substitute I’ve tried after some years of not eating the real thing. I was very impressed with it, as were the rest of the household. It has a very smoky smell and taste. I will definitely buy it again.

Aggghh I had such high expectations! As a vegan you haven’t quite nailed it THIS . It’s such a shame. Texture is massive to vegans and it looked and tasted so wrong. I personally prefer Richmond which has a better taste and the texture is so much better. If a product tastes great I will re-buy it. I won’t be buying again. My daughter also thought it was not nice to eat.

Texture, taste and smell all unappealing. As it sa

Texture, taste and smell all unappealing. As it says on the pack, It is not bacon.

Horrible taste and texture but the dogs like it.

Open to try anything and trying to lose weight without feeling like I've denied myself I thought we would try these because we like most of the various vegan sausages. Whoever said this is like bacon has never seen or eaten any, both the flavour and texture are odd and both cooked and raw this looks nothing like bacon. My 8 year old refused to even try it and after 1 mouthful I cooked it all and fed it the dogs. This is truly awful, try the other brand that's available that one is ok.

Bland. They've done a good job creating a chunky meaty texture, at least if you are to have these in a sandwich. However, the flavour is very bland and they look more like mackrel than bacon.

As a primarily vegetarian household this is a great idea and easy for for a Sunday fry up or adding to sandwiches. Unfortunately the texture and flavour lets it down. It's very rubbery and burns easily.

Smokey, good in sandwiches and pasta

Different texture from actual bacon. However maintains the Smokey ness. By far my go too for “bacon” substitute. Amazing as a morning sandwich or even in carbonara.

Bacon is one of my all time faves, so I was both curious and sceptical to try this plant based alternative. It looks pretty much the same as bacon, and cooks nicely in the frying pan with a little oil. To be honest, this tasted pretty good in a sandwich, which surprised me somewhat. It's very similar in taste to bacon, and much better for the environment. Although I'm not completely won over, this does make a great alternative and something I would happily eat again.