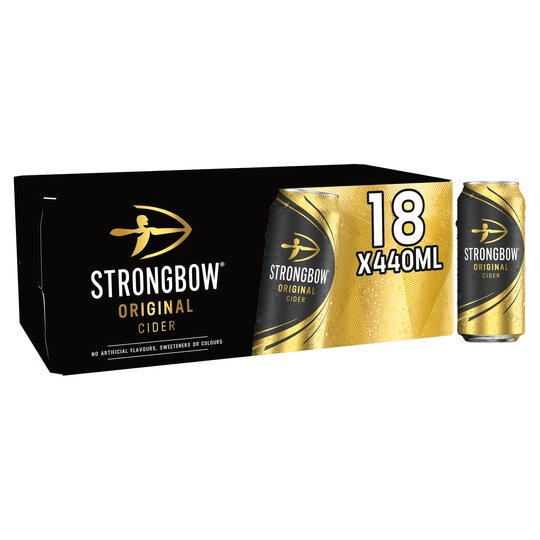 Good value compared to other supermarkets.

The taste of this stuff has deteriorated greatly over the last couple of years. Unfortunately the manufacturers decided it would be a brilliant idea to decrease the alcohol content not just once, but twice. It's been cut from 5.3% to 5% to just 4.5%. This may not appear to be a great deal, it certainly doesn't look like it, but it's enough to seriously alter the flavour, detrimentally. Strongbow is referred to as the most popular cider in the UK, so why mess with it? It ain't broke, it doesn't need fixing. 🤦

Another Watered Down Product

Watered down, so its not a good cider I doubt is its brewed from apples, probably made from concentrate.

Not what it once was.

Not much to it now. Less taste and alcohol content than it used to have. Probably ok for the price but not a great drink. Tastes like a weak children’s drink.

Pleasant everyday cider for drinking with friends. Good price. Bought as part of a promotion

Strongbow is an average cider, ever since the alco

Strongbow is an average cider, ever since the alcohol percentage was reduced, but still, a good around cider with a strong flavour and refreshing taste that's best served chilled. I definitely would buy again and continue to do so, as I am a long term fan of this brand of cider.

Very light and very refreshing. I am reviewing this as part of a promotion.

Great taste and very satisfying. Smooth and light. One of the 1st name's I look for.

I won't be comparing this to proper ciders, but I'm reviewing it against similar products, in other words, cheap fizzy ciders. It's better than some, not as good as others. Clean and refreshing, but not a special flavour. I've tried a range of canned ciders and my opinion is generally that you get what you pay for and this sits in the middle. The exception is that personally I much prefer the Strongbow Cloudy which is about the same price, so I'd not usually buy the Original, but in this case I bought it as part of a promotion.

its Cider made with Apples