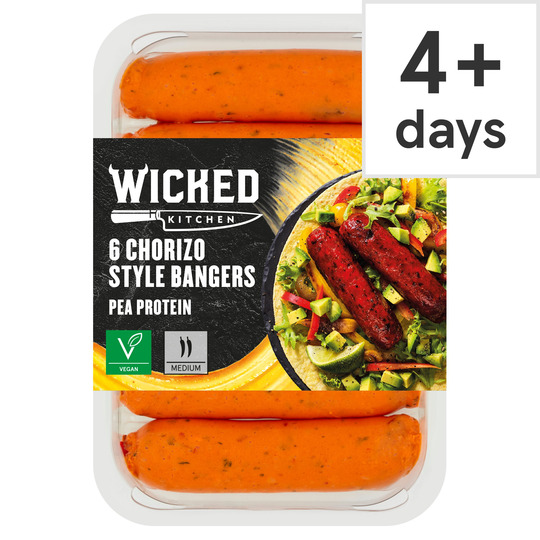 17%of the reference intake
Saturates
1.1g

6%of the reference intake
Sugars
4.2g

21%of the reference intake

Instructions: 200°C/Fan 180°C/Gas 6 25-30 mins Place onto a non-stick baking tray and place in the centre of a pre-heated oven for 25-30 minutes, turning halfway through cooking.

Instructions: 200°C/Fan 180°C/Gas 6 35-40 mins Place onto a non-stick baking tray and place in the centre of a pre-heated oven for 35-40 minutes, turning halfway through cooking.

Instructions: Not suitable for microwave cooking

Great texture, but bland tasting. Might work if cooking in casserole or in a pasta sauce. There are much better tasting vegan sausages on the market, so won’t be coming back to these.

Great texture and flavour. Fantastic on a bbq or f

Great texture and flavour. Fantastic on a bbq or for breakfast. I buy them every week

Not for me thanks

Didn't read the label closely so only discovered when I pulled them out to cook that my 'chorizo sausages' were actually some sort of ersatz veggie thing. Decided to cook them anyway and they are now high on my list of things that taste so gopping you have to throw them in the bin after one bite.

Strong taste of powdered paprika . No Where near t

Strong taste of powdered paprika . No Where near the taste or quality of 'Fire Pit' also sold by Tesco.

I threw them all in the bin as they were just really unpleasant in taste and especially sloppy texture. What a waste as I really don’t like throwing away food atall.

Maybe not what most people might want from a sosig

Tastes mostly of paprika with a texture better-suited to use like nduja.

the reviews on these are bad these are amazing ...think its the way u cook them cant fault them loverly

Absolutely tasteless, with the texture of a sponge. How difficult is it to add spice?? This product is poor

Im not vegan but i bought this as i fancied something different. They are delicious! I baked them in the oven for 25-30 minutes and had them in a pasta bake. The outside texture is really impressive, it is exactly like chorizo. I found myself eating them forgetting they werent meat! The texture is great, they arent soggy or dry in the inside either..just right. The flavour is sort of...red peppery? It has a slight chilli flavour, hot rather than spicy. But only a little bit- just right to add a bit of warmth without drinking milk after! I really like these and I had my friends and flatmates try them and they really like them I think I will use them again next time I have pasta for sure! I think if a meat eater likes the vegan option more, you've done something right! I wish they were a tiny bit more salty, but thats actually a good thing they arent as usually chorizo is too salty as is overwhelming. Where as now I can add salt if i want it rather than trying to even it out.

Bought these in store a month ago and they were delicious! Got them in a delivery now and had to bin them because they tasted gone off with a weird after taste..didn’t wanna chance food poisoning. Would I risk buying again? I don’t know…