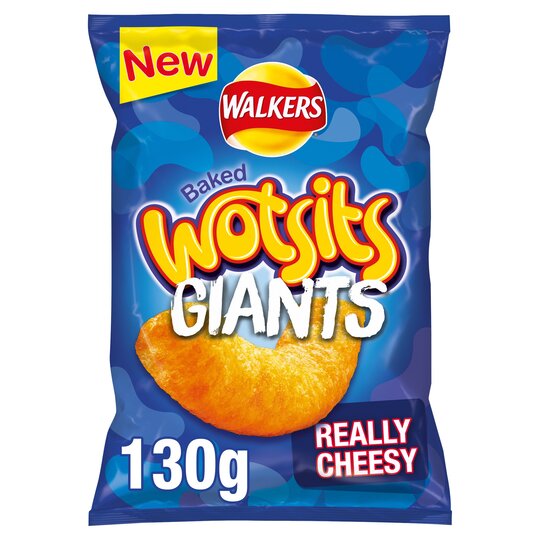 of the reference intake*
Typical values per 100g: Energy 674 kJ

Once opened, consume within 3 days.Store in a cool, dry place.

Disappointing to say the least!

Got a package at Tesco's yesterday. Nice size - nice colour - but that's where it ends! The taste was awful because even though the labeling says it's made with rapeseed oil, the flavour in every bite I took was similar to nauseatingly rancid meat drippings. I never experienced this problem with the smaller Wotsits. What a let-down about these "giant" ones, as they are a nice size and the package size (130g) was good. Maybe the milk or cheese in them had gone bad. Could not eat it due to the rancidity and threw the rest in the bin. Was grateful I didn't get ill.

Totally in love with giant wotsits. They are moorishly delicious and oddly so much better than normal wotsits. I am not supposed to eat yeast but for these I risk it. The only other thing wrong with these crisps is the price. Please bring down the price. How did a packet of crisps become so expensive?

I use to love these Giant Wotsits, big fat puffiness & not to cheesy, (my stomach does like strong cheese flavours). I couldn’t understand the reviews saying they weren’t giant & that they where not much bigger than the average wotsit, totally different picture to the crisp I had been eating I would have totally disagreed with those reviews until the last pack I bought these were totally a different bag these weren't much bigger than the normal wotsits & there was more cheese flavour which for most people will be great as it is cheese flavour crisp. Why have these changed they aren’t they same crisp I used to love, I don’t thing I’d purchase them again as they aren’t much of a difference between these & the standard packs & the standard packs actually work out better cost value.

Not as good as the small ones these tastes little

Not as good as the small ones these tastes little less

We thought that 'Giant' would mean really much bigger but they're not really that much bigger than the ordinary ones. Very similar taste, but we would have called them 'Bigger Wotsits' then when they invent the giant ones....

YUM! YUM! YUM! These are much tastier than the normal sized ones.

Love these. They say giant wotsits but as far as I am concerned these are proper sized ones. I gave up on the normal ones as they are too small and the packets are not worth the money. But these are gorgeous. I love them and your fingers arent to sticky afterwards. Grab a bag. Lush.