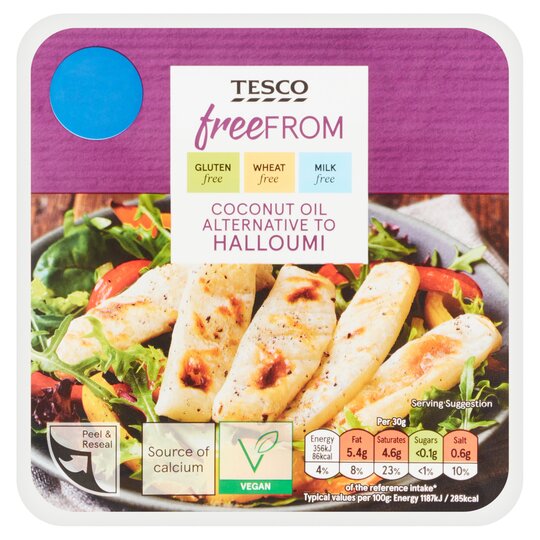 Definitely not even worth trying

Not sure how this got past product testing, it is so bad. We didn't expect it to be realistic but to be honest it tastes and smells like vom. Just sort of melts into a congealed mess when cooking.

Awful! Nothing like halloumi. I can usually cope with vegan cheese, but this was not fit for purpose.

Not a great substitute,flavour,smell,texture match

Not a fan, more like a strong tangy tasting cream cheese

Disappointing on many levels

Very disappointing. Cut up for cubes for vegetable kebabs but the halloumi disintegrated. Under the grill it became very sticky with a horrible taste. Does not even come close to non-vegan halloumi. And there is very little protein in this.I think Tesco need to have a rethink on this product. I would not give it any stars but the site insists on at least one. So maybe I'll award one star for effort in trying to help people with intolerances etc.

Don't bother. It's not as bad as Tesco's other vegan cheese block, which smells like vomit, and is like tasting a block of butter - vile stuff - but this is slightly better, partly due to the mint etc that's added to disguise the rank smell and taste. However it is NOT anything like halloumi! It's doesn't cook well - might be ok to melt on toast but not to cook like you would halloumi. It melts and goes sticky, it isn't firm and squeaky like the real thing. Not as bad as their other one but I wouldn't bother getting it again. So far Violife seems to be the closest thing to cheese and is edible, even though it's more like processed cheese slices rather than real cheese. Tesco's have really failed trying to do their own vegan cheese!

So I just tried it and when it’s raw the texture isn’t too far from halloumi but when cooked it’s not like halloumi, but it’s as close as I thought it could be, it’s just not overly firm. It tastes more like Red Leicester cheese so it has a really strong flavour, not like halloumi in that sense. I wouldn’t buy it again but it hasn’t put off trying other vegan cheese products as it was a nice flavour, just not right for a halloumi alternative

Disgusting do not buy

DO NOT BUY!!!! This is disgusting, it is NOTHING like halloumi. It does not fry like halloumi, doesn’t get crispy, doesn’t have the chewy/firm texture of halloumi, smells gut wrenching and definitely doesn’t taste like halloumi either! (it’s like strong cream cheese rather than the salty taste of halloumi) Instead of rushing to release vegan products just to make a quick buck out of the trend, Tesco should actually spend some time creating quality products.

Thumb down for me

I was very curious to try this new product. Unfortunately, it is a no-no for me. I expected a texture more similar to the original halloumi. The recipe is also enriched with MINT and the taste is quite strong (just a weid combination). I think call it "halloumi" is a bit deceiving to be honest. It's just a cheese with mint. Cheesy mint. I am afraid it will go in my blacklist for alternative. A pity as Tesco has many good other ones!

Unfortunately this cheese is yet another vegan cheese that is bordering on disgusting. My partner and I have found excellent vegan products to substitute for many dairy and meat products, but cheese remains illusive, apart from a local one we have found made out of cashew nuts. The smell of this particular cheese is so bad that we had to throw is directly in the outdoor bin when we couldn't bring ourselves to eat the rest of it (and we hate wasting food)! Whether you've had halloumi before or not, it is still a truly horrible product, both in taste and texture.