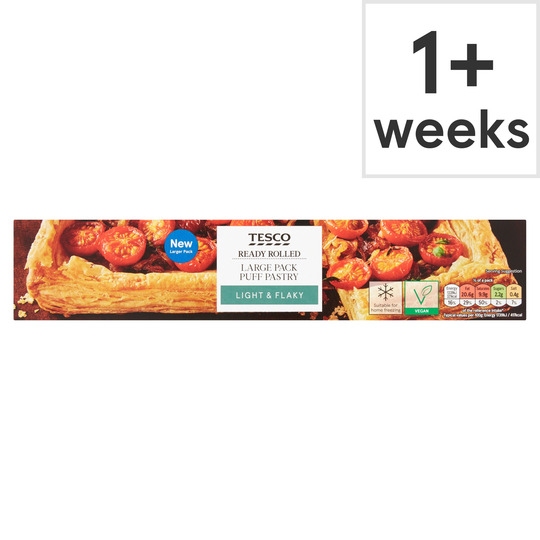 Suitable for home freezing. Ideally freeze as soon as possible after purchase but always by 'use by' date shown. Defrost thoroughly for a minimum of 12 hours in the refrigerator or for 2 hours at room temperature. Once defrosted use on the same day and do not refreeze. Follow the preparation guidelines adjacent. Not suitable for cooking from frozen. Keep refrigerated. Once opened, use within 3 days and by 'use by' date shown.

Instructions: Temperature: 220, 200, 7
Time: 10-15min
Preheat oven. Remove from fridge 10-15 minutes before use and leave at room temperature. Remove all packaging. Unroll the pastry and leave on the baking sheet provided. Cut out as required. Place pastry on a baking tray in the centre of the oven. Cook for 10-15 minutes, or for the time stated in your recipe.

Not recommended, cheap isn't always better. I used this pastry to make cheese and bacon turnovers I'd made them many times using a known brand but thought I would try this because it was bigger What a waste of money, I left it out to get to room temperature but it stuck horribly to the paper then did not puff up it was more like shortcrust. I had bought 3 so tried again not waiting so long after taking it out of the fridge and it was even worse Honestly I've made these turnovers so many times and they are a family staple but I won't be buying this pastry again.

It was awful, was stuck to the paper and I just couldn’t get it off. Had to bin it and use a different one

Not as flaky as the brands I usually use.

The larger pack appealed but the pastry is not quite right. Not awful but not as flaky as usual and I would not buy it again. In the past I have used Jusrol and Tesco's own which I think are pretty much the same.

I used this for a creamy salmon and vegetable tart from one of Tesco's recipes on line and it came out beautifully. Pastry was easy to handle. Result! It was flaky, light and cooked through evenly. (Didn't have any of the issues mentioned by other reviewers). As the pastry was so large, I cut off the excess and used it at a later date. The result was the same...golden, crispy and delicious. Can't fault it and would definitely recommend. Guess it depends on what you're using it for. I'll be buying it again.

I use it for baking

Agree with previous reviews - stuck to the paper and was more like shortcrust - very disappointing!

Very disappointed. Despite being indate there was tiny dark specs throughout the pastry. I tried cooking the pastry as a top on a small pie, the results were more like shortcrust than puff! I opened my second box and it was the same so it went straight in the bin!

It was awful. Fell apart when cooking - very flimsy and I have never gone out of my way to leave a review but after my baking falling apart (hard work blackpicking) I am just really annoyed!! I will stick to the named brands in future!

Dont buy this. This is the worst puff pastry I have ever come across. I tried to make sausage rolls this morning with it, it was practically glued to the wrapping paper and I had to prize it off. So difficult to work with. Wont be purchasing again.