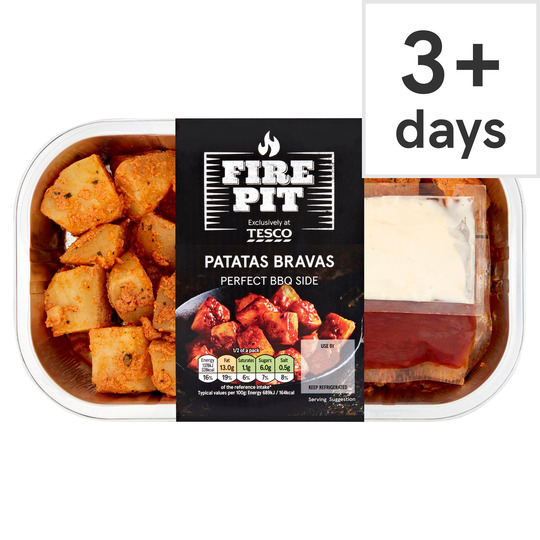 Clubcard Price
1/2 of a pack

I do like Patatas Bravas and I've had these a coup

I do like Patatas Bravas and I've had these a couple of times. Very enjoyable and I recommend them. One small note. The potato size seems to vary so worth checking it is cooked through and not just go by the instructions.

Had to cut the potatoes portions into quarters to try and cook as I thought that they were too big for cooking. Cooked for the recommended time. Tomato sauce was nice. Aioli sauce also nice. Potatoes crunchy raw and under cooked. Disappointed….. Could have been better.

Too spicy and too hard. Don’t bother.

What can I say. Very disappointed. Most were not quite cooked after designated time. They need at least anther 15 mins. Far too spicy. I spend half my life in Spain and these are too hot. Kids through them back at me and the the wife just sort of sneaked them in to the bin. I was determined to eat them, so I did. Not awful just not enjoyable and won’t be buying them again. Probably best avoided 👍

After cooking for 75mins they were still rock hard

After cooking for 75mins they were still rock hard threw them in the bin.

Full and flavour and thoroughly enjoyable. No problems with cooking time as reported by other reviewers. Plenty of sauce

Followed the cooking instructions but potatoes were still raw (and I mean raw, not slightly underdone) after full cooking time in the oven. I’ve now fried in oil, chopped smaller and they’re back in the oven for god knows how long...

Cooked as the packaging stated but after 45mins the potatoes were still raw, left for another 15mins but no improvement still solid in the middle. Ended up chucking them out.

While the appearance and the taste are quite similar to the Spanish dish, the potatoes themselves were impossible to cook. After 35 mins in the oven, another 5-6 in the microwave, and the next day another 10 mins in the ovenwxt dinner, they were still hard and uncooked. Unbelievable

really enjoyed these, its worth the time it takes to cook in the oven. I just needed to add a bit more mayo to mine. But really tasty, my husband enjoyed them.I have put them on my next delivery and hope i get them .I have ordered them to go with the fire pit sausages which are also very very tasty.

Would not buy again

black insides and hard even though cooked to guidelines carefully