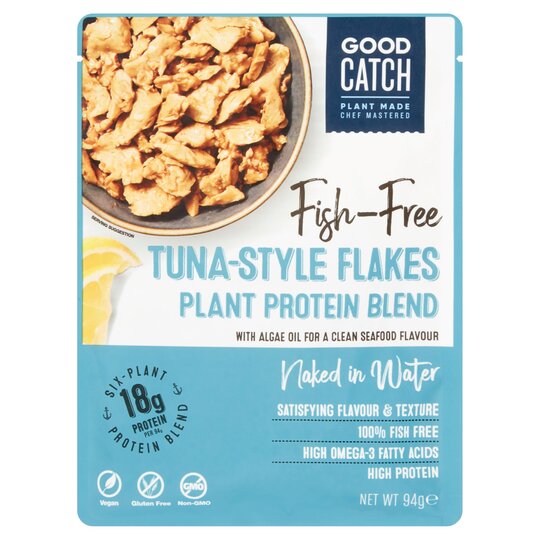 It smells like something that died, washed ashore and then spent a few months rotting in the sun. The flavour is also genuinely disgusting. The texture however, is quite good. A nice tuna alternative is available from Loma Linda, so I can't imagine how this supplier got it so wrong. How did this horrifyingly disgusting product get to market?

Tasted disgusting. Just like the flavour of cod liver oil!

it looks as much like tuna as it can, but i found

it looks as much like tuna as it can, but i found the smell unbearable and the texture was very rubbery, i wouldn't eat it again.

I was under the impression I’d heard good things about this but maybe I should’ve read here first. This is vile. Whoever created it clearly never tasted tuna in their life. I could tell as soon as I opened the pack but (knowing how vegan cheese, eg, isn’t always judgable on smell) still had a taste, but immediately spat it into the bin and threw the rest along with it. It tastes like a cod liver oil capsule burst open in your mouth. If that’s you thing go for it? For this price considering how good other vegan substitutes are getting I really expected more.

Very firm texture, does not flake like tuna. Smell and taste very wrong somehow. Faint taste of something like cod liver old. Not at all appealing.

The worst ‘food’ I have tried

Curiosity unfortunately got the better of me... I feel it my duty to warn you all that this is inedible and anyone who claims otherwise is deluded. Just remembering the vile taste and texture of this is making my feel ill so I need to stop writing this. Not only do I want my money back and to erase the memory, but I feel compensation for damages is due.

Great texture, taste could be improved a little.

As an ex meat eater who ate tuna almost daily - this was okay. Yes when you open the pack it smells a little like seaweed more than fish.. I tried it on its own, just a piece and the texture was bang on. The flavouring a little bit off, if it had the flavour of Tuno (another vegan brand) it would have been great. I added Hellman’s vegan mayonnaise, a little salt and some sweetcorn and had it with a baked potato. I can imaging it being great in pasta too! I’m eating healthily at the moment and the fact that this is just over 100cals for the pack and packed with protein is great! A little bit pricey yes but if more people buy it the price will come down! Don’t buy a fish like product if you are put off by the seaweed/fish smell but you aren’t smelling it you’re eating it... So yeah, overall good but with room to improve. Would be great with a little less seaweed-like taste and a little more salt. But it’s no problem for now just adding my own things to it!

miniscule amount of tuna in this pack. Looks more

miniscule amount of tuna in this pack. Looks more like a sachet of cat food. Poor value for money.

If you are vegan or not, don't buy!

The absolute worst thing ever. That thing did not resemble tuna in one-millionth of a percentage...

Loved this ! Bang on for taste and texture in my opinion, only gave 4 stars because way too expensive.