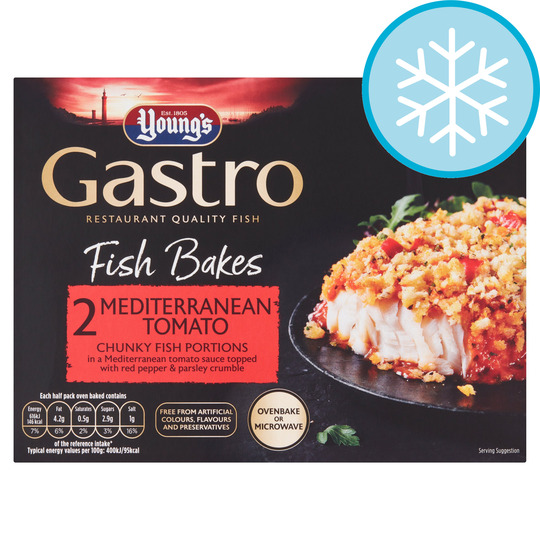 of the reference intake*
Typical values per 100g: Energy 400kJ

Cooking Instructions
Instructions: Our Mediterranean Tomato Fish Bake is best oven baked straight from your freezer. Ensure product is piping hot throughout before serving. All appliances vary, these are guidelines only.
Caution! Plate will become hot during cooking.

View all Frozen Fish in Sauce

Sadly, no longer as good as it once was.

This used to be a good product. Back in July 2020, I gave it only 3* because the portions were very small, but I still bought it regularly, especially when on offer. However, for a while now, whenever I have given it another try, it has ranged from disappointing to disgusting, and I have now stopped buying it altogether, and am changing my review accordingly.

Definitely do not buy. I would not normally write a review but anyone expecting "Gastro restaurant quality fish" will be very disappointed. I think even the cat would turn its nose up at it.

Came out of my fan oven with a pulse. Probably needs put in at 190c, not 170. Had texture and temperature of cold prawns. Gross. Also, if you intend on cooking one portion at a time, you won't be able to do so. Better off with Birdseye's equivalent.

Awful! I was going to just leave this one word here but it needs more. First of all it took longer to cook than the packaging suggested. When it was finally cooked and I dished it out of the container I couldn’t believe there were two tiny grey lumps in the sauce that were meant to be fish! The packaging says it’s Pollock. This is not like any Pollock I have ever eaten before, it was inedible. Do not buy this product! Wouldn’t let me leave zero stars!

These used to be lovely but they’ve obviously changed the quality of the fish. They’re horrid, fish is like cutting through rubber, it’s grey and has a strange consistency to it. Sad to say it went straight in the bin as even the dog wouldn’t eat it (and he’s not fussy....ever!) I definitely would not recommend

Very poor, fish was inedible. Will not buy again

Very poor, fish was inedible. Will not buy again

Terrible - will not buy again

Deserves lower than 1, will never buy again. Cooked per instructions, actually longer as I was waiting on accompanying things to cook. Was still uncooked in the middle. Very disappointing.

texture and taste of a wellington boot

Worst fish we've ever eaten. Texture was like rubber, we even checked our oven as we thought wasn't cooked. Wouldn't even feed it to the dog ( and he's a Labrador )