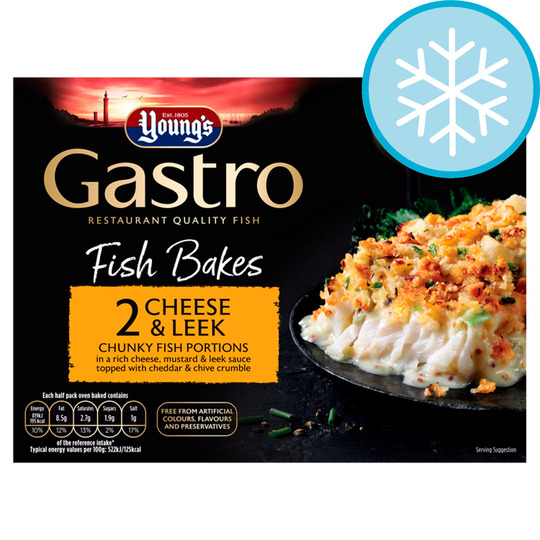 Each half pack oven baked contains

of the reference intake*
Typical values per 100g: Energy 522kJ

Cooking Instructions
Instructions: Our Cheese and Leek Fish Bake is best oven baked straight from your freezer. Ensure product is piping hot throughout before serving. All appliances vary, these are guidelines only.
Caution! Plate will become hot during cooking.

Abhorrant and full of bones

Colour of the fish was brown and grey and smelled like it was going off. The taste wasn't much better. Also, the two bites I had of the fish I couldn't even swallow due to the sheer amount of bones present. As for cooking times, I cooked this in the oven but even after the correct amount of time stated it was still watery and uncooked. I microwaved it for 2 minutes and rescued the sauce which was actually rather nice and was the only reason the entire thing didn't go straight into the bin. I ended up eating the sauce with some oven chips.

One of the worst thing I have ever tasted. The fish which looked nice and white on the packaging was actually grey and the smelll was awful. Do not buy.

Nothing like the picture. My husband threw his in the bin and went without lunch!

Awful! I'm a big fan of other products in the Gastro Fish range, but this was inedible. Hard and chewy, with a weird skin-plus-flesh texture, as if it was reconstituted.

Disappointed is an understatement

Absolutely a waste of money. Fish was hard ,chewy and very little of it. I’ve never tasted anything so appalling. Needless to say it ended up in the bin. I couldn’t leave my review unless I left a star rating. So put 1. In reality I wouldn’t have given it a 1.

The sauce was tasty. The fish was small, lumpy an

The sauce was tasty. The fish was small, lumpy and brown. Parts were inedible.

Awful for taste and texture

This fish was awful. Followed the instructions for oven cooking. It was hard and not cooked through. Put it back in the oven but it was still awful for taste and texture. Will not buy again.

Pity there isn't a -star. Disgusting. After 1 hour of cooking middle still not cooked. As tough as old boots. My husband refused to eat it.